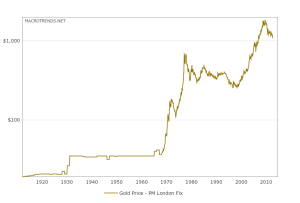 The above chart, cut-and-pasted from MacroTrends, is an excellent pictorial of the price of gold bullion since the early 20th Century.

It was very interesting to watch gold in the next two decades and the never-ending cacophony of what Josh Brown (@reformedbroker) calls the never-ending gold zealots, as gold bullion fell from $800 in 1980 to what I thought was a $200 – $300 cash price in the late 1990’s, as Technology and growth stocks were nearing their peaks.

For me anyway, just from anecdotally observing the gold price action and stock prices, gold and the SP 500 should have a low correlation over a long period of time.

So what’s the point ? Under $1,000 and gold gets interesting in my opinion, from a technical perspective, but I really think that a sustained rally in gold, would require either a bear market in the SP 500 or prolonged subdued returns in the SP 500 and the major equity indices.

Most gold aficionados think of gold as an inflation hedge: I would beg to differ. The 1970’s, a decade where where gold soared, was a decade of subdued equity returns thanks to 1973 – 1974 bear market of 50%, partly caused by OPEC and the price of oil, and partly caused by Watergate and the Constitutional Crisis therein (in my opinion), not to mention Nixon’s price controls and Whip Inflation Now (WIN), and the followed by Jimmy Carter and the disaster that was Iran.

In my opinion, which is just an opinion, gold is a pretty decent hedge for longer-term lousy returns within the SP 500. The two decades where gold soared, the 1970’s and the 2000’s, were periods of both above-average inflation, and then a decade of pretty serious asset deflation, i.e. housing prices and stock prices.

Bottom line: gold’s action between $900 and $1,000 will be interesting. The GLD ETF was owned for clients between 2000 and 2011, where we made the last sold of GLD between $155 and $160. (More and more, with the proliferation of ETF’s, I am using commodity ETF’s rather than operating companies with a significant exposure to commodities, like Alcoa (AA), Freeport (FCX), etc. Prior to the launch of the GLD, I owned Newmont Mining (NEM) for clients, which in my opinion doubles the risk for investors. Look at some of the decisions Freeport’s management made in 2013 and 2014.)

Commodity companies and commodity businesses are notoriously low return businesses. The best period for the stocks and commodities was the explosion in China growth between 2000 and 2012. A return to global growth, whenever that would happen, could change the calculus for the commodity asset class.