With Jamie Dimon’s “hurricane” comment and Elon Musk’s “super-bad feeling” it caused me to wonder whether CEO’s are the better macro forecasters or Wall Street gets it right. I think it depends. No question CEO’s know their own companies far better than equity analysts or Wall Street strategists since they can watch the changes in revenue, EPS and internal metrics like unit sales in real-time far better than outsiders. Thinking back on 2008, Jamie Dimon was throwing up red flags in the 2007 conference calls on individual debt leverage. Housing and autos typically lead us out of every recession, as I learned in my first job as an analyst with a small brokerage shop in Chicago. Does that mean housing and autos will turn down first too ? Given the size of the purchases relative to the average household budget, you would think housing and autos would would be decent leading indicators, but fiscal stimulus after 2020 put a lot of cash into the average American’s household bank account. Does that mean this time is different ? Ryan Detrick recently addressed this here.

There is a pretty wide gap amongst the better known market commentators too: per the last blog post, David Kelly of JP Morgan, Ed Yardeni and Tom Lee remain somewhat sanguine on the US equity market, but the US bond market and the rise in yields is putting pressure on valuations. Ed Yardeni is a high-quality SP 500 earnings analyst – he predicted the $120 low in SP 500 EPS during the 2020 Covid meltdown almost exactly – and from what I read Ed hasn’t yet thought SP 500 EPS would really meltdown.

Something has to give with the SP 500 forward earnings and the price action: this dynamic cannot continue forever. The PE on the SP 500 will only compress for so long, before we have either sharply negative EPS revisions in the SP 500, or a substantial rally in the benchmark.

Having an unusual end to this last week, Bespoke published a table in their Bespoke Report showing “forward returns” after such an occurrence: 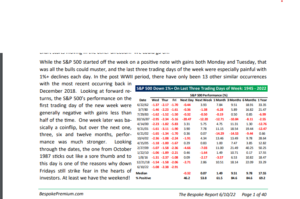 Ultimately, later tonight an email will be sent to clients with the same table with the caveat that not every cycle repeats itself in the exact same way.

Look at the “median” historical returns near the bottom of the table: this data is bullish, BUT the interest rate issue makes this a very different time period.

Conclusion / summary: Given the hot CPI data last Friday morning, it’s difficult to come up with a scenario where Jay Powell can offer anything but tough rhetoric with the FOMC policy statement from this Wednesday, June 15th, 2022 meeting. That being said it seems like this is built into prognosticators forecast for the rest of the year. Can the sentiment be any more bearish than it is right now for both higher interest rates and lower stock prices ? The remarkable aspect to this is that – with the SPY being down 17% YTD as of Friday, June 10 – the SP 500 is still well within the normal “correction” range.

From a sentiment perspective, I personally think gasoline and crude oil is a H-U-G-E issue, and it’s truly hard to find any energy bears or energy pessimists and the Wall Street sentiment around gas prices and crude seemed to get even more bullish this week. The energy sector is up 64% YTD, and yet it’s still just 5% of the SP 500 by market cap.

Truly I don’t know what will happen this week, the rest of the month or through the summer, with the stock and bond markets, but many metrics like sentiment, and fear and bond yields have gotten very stretched. The only metric that’s hung in there is SP 500 earnings, and it would behoove readers to assume that those could see lower revisions with the release of Q2 ’22 financial results starting mid-July ’22.

All eyes on Wednesday’s FOMC announcement and Jay Powell’s comments. So much talk after Friday’s CPI of a 75 bp hike on Wednesday. I think that would cause panic.

None of this is a prediction or forecast. Past performance is no guarantee of future results. Evaluate your own risk and appetite for volatility.