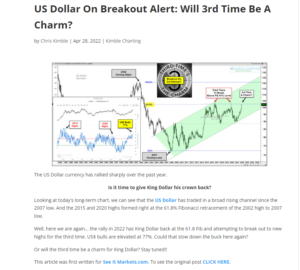 Chris Kimble of Kimble Charting Solutions out of Cincinnati – a very good technician – talking about the US dollar and how it’s trying to break out for the third time. It’s a story not really well-covered by the financial media since – well – you can make a lot of generalizations, but it typically generates a lot of yawns.

Taking an educated guess about the dollar’s strength, I’d guess that the pandemic was truly global in nature and thus – as evidenced by China today – the US got a handle on Covid quickly and all but eliminated it, which has resulted in the US being the first major central bank to start to tighten monetary policy, while Europe is still dealing with negative rates and Japan is driving the yen to zero.

Another good point raised by David Rosenberg (@econoguyrosie), an economist who typically has some good insights, but is usually too bearish for my tastes, noted the dollar’s strength as as a mitigating influence on inflation, which is a very good point. I always think back to the Crash of 1987, and the conditions that preceeded it: rising interest rates, rising inflation, and a rapidly-weakening dollar. Here is the Twitter exchange passed along to me by another good technician, Gary S. Morrow (@garysmorrow): 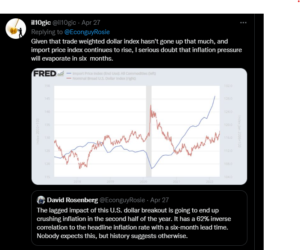 The dollar matters for the larger-cap brethren within the stock market.

The FOMC meeting is next Wednesday, May 4th, and according to fed funds futures, there is a 96.5% probability that Jay Powell is set to do 50 to 75 bps. The April payroll report is Friday, May 6th and the inflation data is the week following. I suspect this will be another jolt for the markets, even with the GDP data today. No one believes the US economy is contracting with the JOLTS survey showing 12 million jobs available and only 6 million unemployed. The jobless claims data and the payroll reports are still too hot.

Truthfully, if I would have ranked them by what i thought the way the stocks should have reacted to earnings reports:

Microsoft responded well to earnings, but Facebook-Meta was the clear winner. Tonight, Apple’s a little softer and Amazon’s a lot softer after Q1 ’22 operating income came in within the mid-point of AMZN’s guide, which is thought to be a miss for the ecommerce giant. Amazon has essentially been flat since September of 2020 when it printed $3,550. Another thing that’s been nagging about Amazon is Jeff Bezos’s resignation: Jack Welch stepped away from GE perfectly, in Sept, 2000, Sam Palmisano stepped away from IBM in late 2011, and the stock peaked in Q1 ’13, leaving it to Ginny Rometty.  Howard Schultz, like Jack Welch, first stepped away from Starbuck’s in 2000 and then returned in 2008. When founders leave the hands-on operating positions at a company, it always gets my attention.

All 5 of the above companies still have another quarter of tough comparisons for Q2 ’22, none harsher than Alphabet, but for the most part, the tougher compare of Q1 ’21 is out of the way.

Financial sector stocks performed horribly in April and especially after Q1 ’22 earnings and most saw positive revisions, at least the financial stocks clients own today. This topic deserves a separate post.

Just writing about this and that tonight. It helps lower the blood pressure.

As always, thanks for reading.