Yes you read that correctly. The SP 500 didn’t solidly break out and remain above the March, 2000, and October, 2007 highs until late April – early May, 2013 and since that time, it has gone substantially higher.

What’s struck me about this current secular bull market is the lack of frenzied trading that accompanied the late 1990’s top in what is now called the dot.com bubble but what was really the large-cap growth outperformance. The last 4 years have seen large-cap growth stocks really trounce the rest of the “style-box” spectrum from small-to-mid cap and all aspects of value stocks (until last November 1, ’20, when everything but large-cap growth equity took off) but – in my impression anyway – no where near the frenzied, ” I gotta be in” sentiment that accompanied the 90’s.

This is still a secular bull market in US stocks, it’s worrisome though that there hasn’t even been a 10% correction since Q4 ’18. It’s all about sector and style rotation now.

The question is then – given the low in March ’09 and the previous highs exceeded in late April ’13- is the secular bull market 13 years old, or just a little over 8 years old, and does it matter ?

Clients equity positioning remains largely unchanged from this early April, ’21 “Top 10 Holdings“. Financials and non-US like Oakmark International have helped greatly this year while the #1 position for clients for the last 8 years – Microsoft – continues to perform well relative to the SP 500.

Readers should know not only are the SP 500 and Nasdaq bumping al-time-highs, but Europe and many of the non-US global markets are poised to trade above their 2006 – 2007 highs and make all-time-highs.

It shocks me that somehow investors don’t think that there could be a 200 bp increase in the Treasury yield over a few year time period, and you’d have to consider the considerable chill that would put on the real estate market.

A 200 bp increase in the 10-year Treasury yield today would take the yield to 3.5%, so if we assume a “true, long-run inflation rate” of 1.5% that would mean that the 2% long-run “real” rate of return for Treasuries has been restored to equilibrium real returns. That’s just back to normal.

When I tell younger investors that the fed funds rate was 20% and the 30-year Treasury yield hit 15%, and mortgage rates were 10.5% in early, 1980, under Paul Vocker’s Fed and Jimmy Carter’s Presidency, they look at me like I have three heads.

Housing is still very strong even though there looks to be weakening with the year-over-year comparisons to 2020 data.

Demographics, the aging of the baby-boomers, the lack of any real sustained inflation in the US, all have convinced the global investment community that we could never seemingly experience a shock to US interest rates like we have the equity markets.

Mike Zaccardi, a good technician over on Twitter notes the CDS (credit default swap) action is now tighter than pre-Covid-19 in the US and Europe. (See above charts). 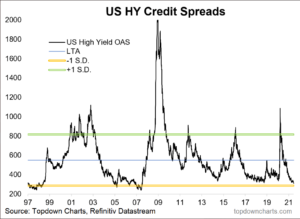 In April, ’21 this blog post noted that corporate high-yield was fully-valued (very Captain Obvious of me), and the PIMCO High Yield fund was sold from client accounts, but because municipal bonds had bottomed around the time of the Presidential election in early November ’20, a lot of that PIMCO allocation went into high-yield muni (NHMAX) and short-term high yield municipal bonds (NVHAX). Clients are also long SHYD, the VanEck high-yield muni ETF, for liquidity reasons i.e. a trading vehicle as opposed to just mutual funds.

By shifting some of the high-yield allocation from corporate to municipal, I felt like clients would “win” (or lose less not knowing what interest rates would do) in muni’s vs corporates given the Biden Administration’s desire to raise all kinds of taxes, i.e. personal, corporate and estate.

Here is the February ’20 article on the interest in muni’s.

Here is how client bond funds have performed YTD as of Friday, June 18, 2021:

One aspect of muni high-yield to caution readers about is the extreme duration on muni high-yield. The maturities are typically much longer than corporate high yield. However John Miller’s Nuveen High-Yield Fund has managed that long duration very well. In Q1 ’21 even though interest rates rose sharply, the fund managed to maintain a positive YTD return.

Morningstar’s John Rekenthaler posted an article over the weekend on the long-term expected US stock returns (read SP 500) being 7.5% per year.  My expectation is that this kind of article will get a lot of blowback. (You might need a Morningstar Premium prescription to read the article.)

Having long been a fan of Morningstar Premium’s individual stock analysis, the broader, topical articles are pretty good, too.

Just so readers of this blog know, John isn’t really telling us anything that hasn’t been know for decades.

Wonderful article from Morgan Housel, by way of Howard Lindzon’s blog here. Morgan’s article reminds me of the old saying that shows up on Facebook, from time to time: “Everyone you meet is fighting a battle you know nothing about. Be kind. Always” Brad Meltzer

Take everything you read here as one opinion. Always invest based on your own financial profile and ability to stomach market volatility.