This blog post on the credit markets on May 5th, gave the first reference to the SP 500 being flat over the last 18 months.

Let’s flush out the numbers a little further:

Friday, May 13th’s, close 12 points below the January 26th, 2018 high tick indicates that – despite the volatility – the SP 500 has gone nowhere for 16 months despite the fact that SP 500 earnings continue to rise, albeit it at a slower rate of increase than last year.

Thus – given the change in interest rates and the subsequent SP 500 earnings growth – the case can be made the SP 500 has gotten relatively cheaper over the last 16 months, albeit not dramatically so. 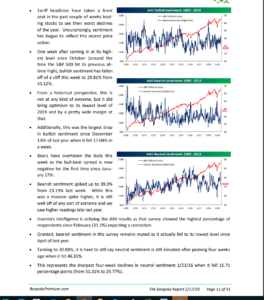 Sentiment has turned sharply negative given the Bespoke data above, from Bespoke’s Weekly letter dated 5/17/19.

Summary / conclusion: PE “expansion” is the grist of longer-term bull markets as we saw in the 1980’s and 1990’s as SP 500 earnings grew, but the market multiple kept rising with that earnings growth as interest rates fell, Communism faded, gradual deregulation of the US economy occurred and Technology as a productivity-driver grew in importance starting in the early 1980s.

The “earnings recession” has been avoided so the fact that the SP 500 has just treaded water over the last 16 months, means that – when the SP 500 starts to sniff out faster earnings growth, and like a beach ball being held under the water, the SP 500 should eventually break out to an all-time-high when meaningful SP 500 earnings growth returns.

Take any forecast with a healthy skepticism, but I expect the SP 500 will see meaningful new highs in 2019.