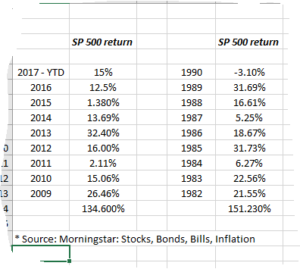 Still trying to use the Snipping Tool on Office 10, so excuse the 2nd grade, “paint by numbers” quality of the Excel table/chart.

This has been a much “smoother” bull market in my opinion, just eyeballing the data.

The up years have been less dramatic and so have the lower-return years.

What’s it all mean ? Not sure, just thought i’d gaze at the navel this weekend.

The two big differences I see since ive lived them both up close and personal:

1.) Interest rates were near 30 years high’s in the early 80’s and gradually came down during the 1982 bull, while the 10-year Treasury yield is near 30 year lows currently and likely to rise;

2.) The banking system went from near-utility status in the early 1980’s to tremendous capital, jobs and loan creation, while the opposite happened to the banking system with the 2009 bull, as regulation gradually constricted the banks, requiring more capital be held against less portfolio risk.

There are a lot more differences, but the blog post will be kept short and sweet.