With 10 trading days left in the quarter, the “consistent inconsistency” about economic data and now the looming question about SP 500 earnings durability after FedEx’s “a global recession is looming” (me paraphrasing the FedEx CEO’s comments), only complicates matters for investors.

As a believer in the “June ’22 being a hard bottom for the SP 500 and the 10-year Treasury yield” the CPI this week and now FedEx, along with Adobe and GE, have thrown a big question mark into whether the June 22’s lows for the SP 500 are durable and solid.

After an ugly market reaction to last Tuesday’s hotter-than-expected August CPI report, jobless claims data on Thursday fell (again) which means the labor market seems to be remaining strong and healthy, then FedEx drops the bomb on Thursday night, September 15th, 2022, cutting their fiscal Q1 and fiscal Q2 EPS estimates in half. FedEx was expecting roughly $20 in EPS for fiscal 2023 which ends May ’23. (Exiting their last earnings release in June ’22, the consensus estimate for FDX’s fiscal 2023 estimate was $22.77 per share.) As a long-time fan of FedEx over the years given it’s global footprint and the steady presence of Fred Smith (now Chairman), the fact is it is a tough business in which to invest given the operating leverage of the business and the fact that “capex” is typically 40% – 50% of cash-flow from operations. Small changes in revenue mean large changes in EPS for a heavy capex business i.e. business with a high degree of operating leverage. It would be great to see FedEx CEO Raj Subramaniam convert FedEx to a leaner, and meaner, higher-margin freight company, but that’s far easier said than done, when you have a global footprint and your European acquisition – TNT – has just gotten fully integrated into the parent company.

What struck me about Raj’s comments was the “end of the quarter” aspect, and the decline in demand. Most companies that are warning are still using the oft-mentioned “supply-chain” excuse, which could be valid, but CEO’s never blame themselves or say “we simply executed like an intoxicated, minor league baseball team”. It sounded as if the demand collapse occurred rather suddenly at the end of August ’22. Many are blaming FedEx for blaming the shortfall on a global recession, but a business like FedEx has EPS that is very sensitive to revenue. The FedEx business model is similar to an airline i.e. there is little room for error.

SP 500 data: (remember, this data is “pre FedEx’s warning” since that warning came late Thursday night and Refinitiv cuts off the reports as of Thursday night’s close for Friday publication.)

Next week, Lennar (LEN), Costco (COST) and the FedEx (FDX) report their August ’22 quarters. We already know the substance of FDX, all we need are the details. Lennar will be interesting. Costco has been a rock throughout 2022. Fantastic retailer, out-executing everyone. 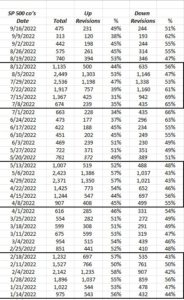 Although it’s really geeky detail, this table is updated weekly from Refinitiv’s “This Week in Earnings” and shows the number of SP 500 stocks that have seen positive vs negative EPS revisions.

Start from the bottom of the table and work up: note how Q4 ’21 reported from January to early Feb ’22, saw (every week) positive EPS revisions above 50% (4th column). Then for Q1 ’22 earnings results, (reported April to early May ’22), the number of positive EPS revisions were above 50% for just 4 weeks of the 6 week reporting period. For Q2 ’22, which was reported from mid-July to mid-August ’22, none of the weeks saw EPS revisions greater than 50%, thus negative revisions were a higher percentage than positive revisions.

You could possibly explain this a number of ways: 1.) sell-side analysts are becoming more cautious and are less likely to be aggressive and raise EPS estimates, or 2.) the Q2 22 earnings results were facing the toughest compares of the Covid-influenced period, lapping a quarter – Q2 ’21 – where SP 500 revenue grew 25% and EPS grew 96% year-over-year with EPS generating a 15% “upside surprise” in Q2 ’21, or 3.) There really could be an earnings slowdown coming and the steadily-negative revisions lower could be part of that.

Here’s the catch to all of this: SP 500 EPS estimates typically weaken in the quarter preceding the earnings reports – that’s the normal pre-Covid pattern.

However to be frank with readers, we are likely seeing a witches brew of cautious analysts, weakening estimates and the typical pattern pre-earnings.

Here’s another data point for readers: the “positive revisions” haven’t been this negative since Q1 ’20 or the Covid-driven shutdown of the US. (The spreadsheet starts in 2009 and although there have been a few weeks missed in between, there are roughly 680 lines of EPS revision data. The point being it’s been mostly the post-2008 bull  market for the SP 500. This will be a good test for the data.)

Summary / conclusion: The FOMC’s Wednesday, September 21 ’22 monetary policy release, will have everyone’s attention this week. The probability of a 100 bp increase in the fed funds rate has fallen from mid-week to this weekend’s 18% as the chart below shows. 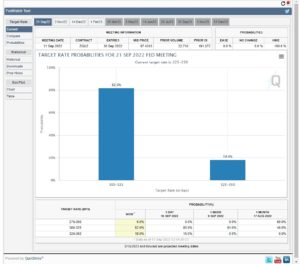 This chart is cut-and-pasted from the Chicago Merc’s fed funds FedWatch Tool.

It’s pretty clear as of today, Jay Powell and the FOMC will raise the fed funds rate by 75 bp’s as of Wednesday’s meeting.

The expectations for dovish language seem too anticipatory today, with little fundamental reason for Jay to change his hawkish tenor.

I would have packed more earnings-related spreadsheets into this weekend’s update, but the only thing that matters now is that is whether pre-announcements start to accelerate and companies begin to guide lower at a faster rate. Some companies won’t do that until earnings are released in the October – November timeframe.

The CPI data was a shock this week, and I don’t how an investor can’t be more cautious with only a 5% drop needed to retest the June ’22 lows. Expect Powell to stay hawkish and harsh this week, although that might be starting to lose it’s impact some. Who doesn’t think the Powell and the gov’s will be trying to talk inflation down ?

Take this all with substantial skepticism. It’s one person’s opinion and past performance is no guarantee of future results. This can all change very quickly too as it did in late December, 2018 when the market sniffed out that Powell was going to hold on the rate hikes and the market rallied sharply. In 1994, the SP 500 and the Treasury market bottomed before year-end ’94 and even though Alan Greenspan raised rates again in early ’95, the stock and bond markets ignored the raise in fed funds.

When this current environment turns, (and it may be a while), it will happen very quickly. This isn’t the liquidity trap era of post 2008.

As always, thanks for reading.