There really can be nothing “quick” about an earnings preview to cover the salient points. Here’s a quick (as it can be made) look at the first 3 of big 5 megacap tech stocks reporting this coming week.

1.) Would have preferred not to see the stock splits with AMZN, GOOGL, TSLA, etc. To me it’s an admission that might be a tougher operating environment for the companies going forward;

2.) There is a high degree of nervousness coming into this week’s earnings for the mega-cap names. SNAP illustrated that this previous week, as it had a big effect on GOOGL’s price action Friday, w/ GOOGL falling 5% and below it’s 50-day moving average. Ad spending and currency is going to be a big issue around earnings this week; 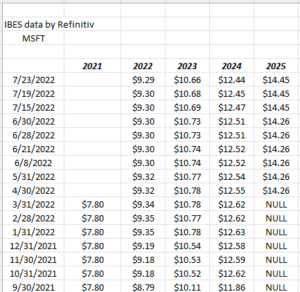 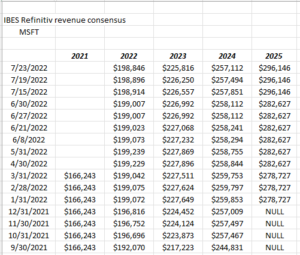 All consensus estimates courtesy of IBES data by Refinitiv.

MSFT summary: MSFT has a tough compare against June ’21, where revenue and EPS growth was 21% and 49% respectively. Also, currency is going to play a big issue with fiscal Q1 ’23 guidance and full-year ’23 guidance, although the dollar – per some technicians – has already likely peaked. MSFT guidance was 3% currency impact for Q4 ’22. Azure continues to be the straw that stirs the drink and MSFT’s quarter will likely show Azure’s growth slowing (as it has for some time) albeit at a very gradual rate, as the Intelligent Cloud is now 40% and 41% of MSFT’s total revenue and operating income as of the March ’22 quarter. Azure’s y.y growth is expected at 43% – 45% for Q4 ’22. Since March ’19, Intelligent Cloud’s revenue has grown an average of 24% per quarter, while IC’s operating income has grown 33% (avg) per quarter. Some analysts are watching MSFT’s Office trajectory, as well. Most of the “macro” or top-down research still believe the cloud and thus Azure remain in secular growth cycles, but take that with a grain of salt since those opinions aren’t typically revised until it’s too late. Azure remains the #2 cloud product in terms of market share, to Amazon Web Services (AWS) so this week will give us an update on the cloud growth trajectory from the two major players.

Free-cash-flow generation: leaving readers with something proprietary to this blog’s research is always the goal, rather than simply regurgitating widely-help Street opinions, but check MSFT’s free-cash generation over the last 5, 10, 15, and 20 quarters:

Personally, I think MSFT will be ok after earnings, but with nervousness over currency. $105 bl in cash on the balance sheet as of the March ’22 quarter isn’t too shabby either. MSFT has steadily doubled their share repurchases from $3.7 to $4.0 billion as of late 2018 to $8.8 billion as of last quarter. Maybe the 2022 correction, will be the gift that keeps on giving from the share repurchase perspective. 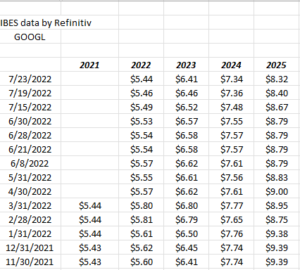 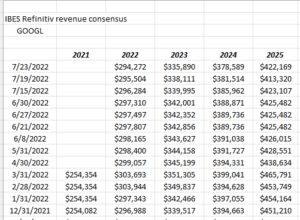 Summary: GOOGL’s current consensus is expecting a 3% decline in EPS in calendar ’22 but +18% in 2023, on expected revenue growth of 14% for both years. It’s clear with SNAP’s earnings on Thursday, July 21, that digital ad spending is down, but SNAP doesn’t have GOOGL’s reach either. GOOGL is trading at 20x and 17x the ’22 and ’23 multiple (and 14x and 20x cash-flow and FCF) for an average EPS growth rate over the next 2 years of 7% – 8% so the PEG multiple is pretty salty. GOOGL sports a 5% free-cash-flow yield coming into the earnings report and still has $133 billion or 10% of GOOGL’s market cap in cash & securities on the balance sheet as of the March ’22 quarter. GOOGL hasn’t pulled down their balance sheet cash very much at all, even though the buyback has steadily increased.

We trust in Ruth.

I have not seen any research commentary on whether GOOGL cloud is any real threat to AWS or Azure.

No question the quarter will be a challenge for the search giant. The popular opinion is that digital ad spending will be the big metric and currency likely be discussed as well. 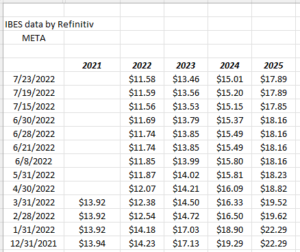 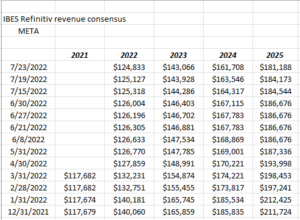 Summary: META was sold from the vast majority of accounts in 2017, with the Cambridge Analytica fiasco. However the stock is still trading above where it was sold back then, since (I think) it was disposed of between $150 – $160 per share. Looking at forward EPS estimates for Meta, the Street is looking for an “average” of 1% EPS growth through 2024, with a drop of -16% this year, +17% next year in 2023 and then +3% in 2024. That’s not good with the stock trading at 15x forward earnings.

Realistically, META could trade below $150 and maybe even more reasonable would be a $125 market price, where I’d get interested if the estimates would start to stabilize, or maybe even decline at a more moderate pace.

META is currently sporting an 8% FCF yield and a cash-flow and free-cash valuation of 8x and 13x.

The stock is getting completely washed out on the technicals, but I’d think the future really depends on how fast you think the MetaVerse can develop and become material. The consensus estimate revisions are saying that won’t happen that quickly.

The Street was wrong on META in 2012, and 2013 when the old Facebook pivoted to mobile and the stock took off. The IPO peaked out over $40 in 2012 and then the stock slid ultimately below $20 in the summer of 2013 where it ultimately bottomed.

The point is the Street has always underestimated Mark Zuckerberg.

Personally I think the stock is too risky here from all but a sentiment perspective.

That’s just one opinion: there are a lot of high-quality value investors sniffing around the stock here.

Part II with earnings preview on Apple and Amazon, will follow tomorrow along with an expected earnings summary for the week.

It’s a lot of work. If I try and write too much with this level of detail, it takes too long, I get tired and mistakes are made.

Last night was the SP 500 overview of earnings for regular readers, and Microsoft was left out of the opening paragraph.

So far the big issues coming into this week:

Thanks for reading. Form your own opinions. Take everything here with substantial skepticism. Don’t be a hero – you don’t need to buy in front of an earnings reports, particularly with a decent secular grower. You’re just gambling. Be patient and if you buy a little late so be it, wait until the downtrends are broken.