The June 17th low was the “post-CPI” and post-Fed increase of 75 bp’s in the fed funds rate. 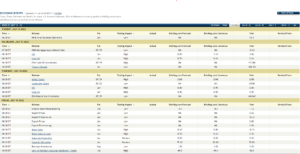 Here is Briefing.com’s list of coming economic releases this week. Be sure and note Wednesday’s headline CPI expectations. Core is expected to come in a little better, but with the May data, released in June which came just prior to the FOMC meeting, core CPI data was right in line with expectations, and the headline got all the media attention, mainly thanks to the stock and bond market reactions.

The frenzy around the CPI data this week is somewhat reminiscent of the crude oil inventory build data in 2007 or the semiconductor billing cycle that was watched in the late 1990’s. It only dawned on me after these periods, that the fact these particular releases were getting all this attention, mean that a top or peak was much closer than was thought. 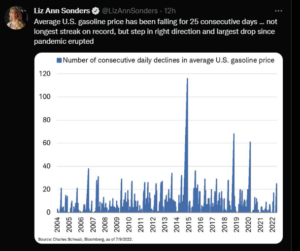 LizAnn Sonders, Schwab top strategist posted this chart today on Twitter that gasoline prices have now declined for 25 consecutive days. Crude oil has not made a new high since March ’22, copper has fallen sharply as have many of the grain and other commodity prices.

Here’s a chart from the weekly Bespoke Report showing that commodities in short supply are falling rapidly: 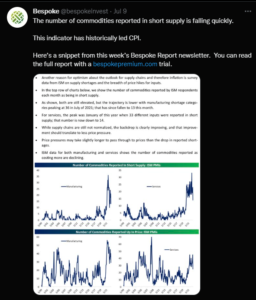 The final chart: short interest has expanded in the SP 500: 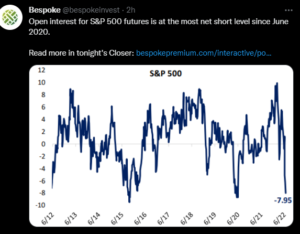 When this chart was seen from Bespoke’s Closer today the first thing that jumped to mind was “short covering rally” if any of this inflation data comes in better than expected, and since Treasury breakevens have already accounted for a return to “normal” of the longer-run inflation rate, you have to wonder what all the fuss is about.

Don’t construe this as advice or a forecast, but I’m very puzzled at the very high levels of negative sentiment still lingering around the capital markets. The June jobs report last Friday, which was a “net 300,000” jobs added to the US economy after the downward revisions to prior months, was still pretty healthy.

The oft-mentioned pain trade today seems to be that the street will be caught net short or not long enough and we see a very nice rally.

The Fed and the FOMC should move another 75 bp’s in July to get the fed funds rate back to neutral as quickly as possible. 2.25% is much closer to neutral than where we were just 3 months ago. If the inflation data starts to moderate, as the Treasury breakevens tell us it will, maybe Jay Powell decides to move 25 bp’s in the meetings following the July ’22 meeting. The next FOMC rate decision is Wednesday, July 27th, 2022.

It’s hard to be as bearish as the financial media. Sentiment is horrible around both stocks and bonds today. That being said, be prepared to play it both ways in the next week.

Don’t get trapped into a market call since your initial visceral reaction is to defend the call and defend yourself as to why you are / should be right, rather than paying attention to price.