The 75 basis point fed funds rate hike today, was not a surprise since after the CPI number last Friday, June 10th, the Street built in the higher fed funds rate quite quickly into the fed funds futures traded at the CME. (Nice call by Barclay’s by the way – they seemed to be the first to call for the 75 bp’s and then CNBC picked it up and then Jefferies got on board, and away it went.)

Watching the market trade after the FOMC announcement today, the dollar (as measured by the UUP), and crude oil were both lower, but not by nearly enough to start to make a difference in terms of future fed funds rate hikes.

Crude oil has to crack or break down, and after some of the bullish comments last week, that’s unlikely to happen. Was it Goldman or Gundlach that put a new price target of $160 on a barrel of crude ? Most retail investors underestimate the changes in the US dollar and they shouldn’t since over 40% of the SP 500’s revenue is considered “non-US”.

The dollar is really strong, back near 2002 highs, but in my opinion, crude oil is the “tell” for this market: when it breaks down, buy stocks and longer-maturity bonds.

However, a breakdown in crude oil doesn’t seem that it is even close to happening today.

Looking at the Treasury yield curve today, 2’s through 30’s are almost flat with each other as is the rest of the curve. This is very tough on the banks and they are trading that way. I didn’t think I could see a world where JP Morgan could trade down from the high $160’s in early January ’22 to $115 by mid-June ’22. JPM, Schwab (SCHW) and some other large-cap financials are holding their May 20 lows, again, which is a positive.

A number of stocks are holding above their May 20th lows despite the drop in the SP 500 below that key level in the last week. Amazon (AMZN), Alphabet (GOOGL), and even Microsoft (MSFT) but MSFT broke below it’s May 20th low and then rallied up through it today.

That’s a technical positive positive for big-cap tech, but let’s see how long it lasts.

For the SP 500 to be considered healing itself, it must trade back above 3,810 which it did for a short period today, and then remain above that level, which it could not by the end of trading today.

The next technical levels would then be the March ’22 lows of 4,157 and 4,161 and then remain above those key prints, and after that I’d say readers want to see what the market leadership is at that point and get comfortable that there is a longer-term bottom in place. 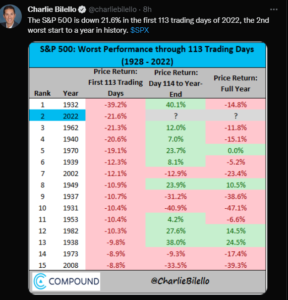 Summary / conclusion:  As Mike Tyson and many famous Army General’s have commented, “everybody’s got a plan, until you get punched in the mouth” (or until the first shot is fired.) With just two weeks and 10 – 11 trading days left in the Q2 ’22, and the Fed out of the way for a spell, it would make sense to see a decent rally into the quarter end.

It would help to see the SP 500 close above 3,810 by the end of June. I think that’s a strong possibility, but getting to the March ’22 lows in two weeks would be a stretch in my opinion.

None of this is a prediction or forecast, just laying down some thoughts based on market technicals and quarter-end happenings.

Some AGG and TLT were added to client accounts in small doses last week, and more is expected to be added around FMOC meetings and a nervous Treasury market.

Jay Powell was actually pretty confident in the US economy today, which might explain why SP 500 earnings estimates remain firm, but recession risk has to be hedged for clients.

Market sentiment by some measures has never been this negative, except for the Energy sector, which is wildly bullish right now. President Biden was criticized for his letter to oil companies and refineries but – even as a political rightie – I thought it was smart. He’s using the bully pulpit and trying to push the oil companies as far as he can with the stick. He is doing what Powell has been doing for 6 months with interest rates – jawboning and cajoling – to try and generate some forward movement for lower oil prices.

Both will likely be equally “successful” using what my old Money & Banking text calls “moral suasion”. (In other words, not so much, but at least it’s something.)

The regular update will be out out over the coming weekend.