Rick Rieder of Blackrock did his monthly bond call on Thursday morning, June 9th, 2022, and if readers aren’t listening in, both Rick’s commentary and the slides are well worth your time. It’s chock full of good info. Rick was considerably more cautious around the SP 500 and the equity market during Thursday’s call. Two sentences during the call really jumped out: 1.) Rick’s question about “How deep will the decline be ?” (presumably Rick was talking about the economic decline), and 2.) his declarative statement that “equities are not cheap”.

Rick has been pretty sanguine about the US equity market the last 18 months (understandably so) and the mega-caps given their free-cash-flow generation, but he’s turned considerably more cautious with this latest call and you can’t blame him for that conclusion.

One other thing Rick mentioned: he talked about how the energy impact on inflation (drilling) and the food impact on inflation (Ukraine) were both essentially out of Powell’s and the FOMC’s hands. What’s worrisome about that – doing the calculus- to lower demand for energy (and as Rick mentioned, the Fed really can’t lower food demand) it will take bringing the US economy to a screeching halt(my word’s, not Rick’s). That’s how I thought about it – sure hope that conclusion is wrong.

This blog reads everyone, from Ed Yardeni to David Kelly at JP Morgan and in 2022, a subscription to Tom Lee at @fundstrat has been worth the price. Ed Yardeni in early 2000, nailed the pullback in SP 500 EPS almost exactly, from 2019’s full-year SP 500 EPS print of $162 and change, to the lows near $120. You can find Ed’s work over on LinkedIn which he generously shares publicly and it’s well worth the time to read the cliff notes. I was a subscriber to Ed’s work for a time, but there’s a lot to parse through and thus I never found time to read anything close to the full product so I try and catch the highlights.

As this is being written on Friday morning, June 10th, 2022, the 10-year Treasury yield at 3.14% is poised to trade above the May 9, ’22 cycle high of 3.167%. Maybe it will take next week’s FOMC meeting to break that resistance level. One thing that bothered me listening to the hyperbolic and overheated CPI commentary this morning, is that the “core CPI” of 0.6% print was a hotter-than-expected, with the street expecting 0.5%, but it was flat with April’s 0.6% print, so it didn’t get worse sequentially.

Many readers remember Jeff Miller, the great blogger over at ” A Dash of Insight”. Jeff and I became friends after our time at TheStreet.com where we both wrote for a while, and we talked about the importance of the weekly “jobless claims data”. Jeff explained to me that the fact that the data is “timely” (every Thursday morning tracks the week prior data) and its “frequent” (i.e. every Thursday morning, elevates its importance as an economic release. When you think about the economic data – particularly the nonfarm payroll report – it takes another two months after the initial release to determine the final number .

The point being that jobless claims can capture turning points in the US economy rather quickly – perhaps better than other data – and the sharp rise in weekly jobless claims since the mid-March ’22 low around 165, 000, to yesterday’s 228,000 is making me more cautious. I unfortunately remember living through this in 2001 – 2002 and then 2007 and watching jobless claims rise and thinking “they’ll snap back” and of course they didn’t.

If nothing else, watch the trend in the jobless claims data.

As is explained in the Summary / conclusion, the normal SP 500 earnings update won’t be out until late Saturday night or Sunday, but Refinitiv sent their “SP 500 Earnings Scorecard” early on Friday, and from that report this spreadsheet table below is compiled every week and sometimes copied to the blog.

Note how there still is not degradation of the expected, quarterly EPS and revenue growth rates for the SP 500 and in fact 2022 quarters in the back half of the year, continue to see higher growth rate revisions. It’s puzzling given the market action and the expectation that Jay Powell and the FOMC will really have to slow the US economy. 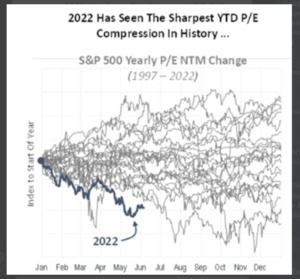 Something has to give between these two dynamics: logic would tell readers there is more risk today in “E” than “P”.

Summary / conclusion: As a frustrated triathlete the last 5 – 7 years, this Saturday will see me riding the infamous 40-mile Ironman loop in Madison, Wisconsin in preparation for the Ironman race later in the summer. The SP 500 earnings update this blog publishes won’t likely be out until late Saturday night or on Sunday, since the ride starts at 8 am Saturday and a nap will be the first thing on the agenda after returning from Madison. (This is a brutal Midwest course given the hills, the wind, the cars, and it will be have to be ridden twice for a full Ironman, during stock and bond market(s) like 2022 though, it’s a great way to work off stress.)

To salvage the SP 500 stock and bond markets as of today, I think you’d need to see a 10% pullback in the price of crude oil and gasoline, and given the commentary in the last two weeks, how likely is that ?

None of this is advice or a recommendation, and within the top 10 – 12 holdings, the positions can change quickly, without being updated. Evaluate your own tolerance and appetite for risk, and adjust your portfolio accordingly.

More to come this weekend.