Like Aaron Rodgers possibly never returning to Lambeau, the mega-cap tech stocks may have reached price levels in late 2021 that won’t be seen again for a few years, particularly if interest rates rise to the extent the Fed has warned. Like Sean Connery’s (Marco Ramius) great line to Alec Baldwin (Jack Ryan) in “The Hunt for Red October” when both are scouring the nuclear missile silo for the rogue Soviet saboteur, and Ramius says to Baldwin, “there are a lot of things in here that don’t react well to bullets”, the mega-cap tech sector and growth stocks that have held up the SP 500 for the last year, don’t typically react well to higher interest rates and possibly slowing growth.

Consensus: Per IBES by Refinitiv, the sell-side is looking for $3.30 on $15.96 billion in revenue for expected y.y growth of 59% on a decline revenue of 22%. The spinoff of Kyndryl Holdings (KD) in Q4 ’21, IBM’s old data center business, could be impacting revenue. The other tipoff is per the IBES data by Refinitiv, the sell-side is not publishing estimates for for 2024 or 2025 yet, so the Street has really pulled in their horns on how and what to model for IBM after the next 2 years. 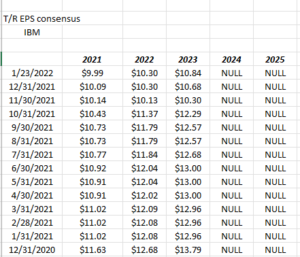 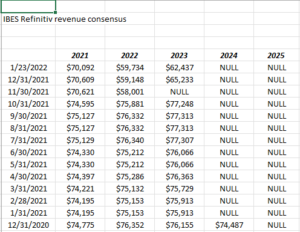 The consensus estimate revisions per IBES data by Refinitiv are quite grim, but again this reflects IBM “ex KD” and we will need to see what the guidance is for organic growth for 2022. The current estimate for 2022 is for +3% EPS growth the next 12 months.

That being said, maybe Arvind (IBM CEO) can work some kind of turnaround. IBM is trading at 13x forward 2022 and 2023 EPS for an average expected EPS growth rate the next 2 years of 4% on expected revenue growth of -10%. Morningstar still believes that just 10% of IBM’s existing client base will transition to RedHat. The stock always looks reasonable on a cash-flow basis, trading at 7x-8x cash-flow and 12x trailing free-cash flow.

The most compelling financial metric – or rather perhaps the most telling metric – is that between 2010 and 2020, IBM’s “average” revenue growth was a -2% for that 11-year period.

The dividend yield is currently over 5% as of Friday, January 21, 2022’s close and the old mainframe tech giant hasn’t repurchased ANY stock in the last 8 quarters and hasn’t repo’ed $2 billion in any quarter since December ’18.

To set up the analysis of MSFT for readers, Satya Nadella was said to have sold half his MSFT stock in calendar Q4 ’21, but that in and of itself is deceptive since it didn’t say what was done with stock options and what that cash sale of stock was as a percentage of his MSFT holdings. Another headline that got my attention was Salesforce’s warning after it’s Q4 ’21 report sending the stock down from over $300 in December ’21 to Friday, January 21, 2022’s close of $218 for CRM. That’s a big drawdown in 30 days. It’s no big surprise that the cloud and Azure is Microsoft’s key growth product over the last 10 years within Intelligent Cloud – Intelligent Cloud now representing 37% of MSFT total revenue and operating income as of 9/30/21 – with Azure growing 50% y.y quarter-by-quarter. With Amazon’s AWS position being the #1 product or market share leader in the cloud and Azure being #2, the Salesforce guide was another good reason to not overstay start reducing client positions in MSFT. Like the streaming market place and competition, the cloud market won’t likely get any easier or less crowded and it’s been a remarkable run in the last 8 years. Finally, the ATVI all-cash, $69 billion acquisition, was another heads-up as Satya repositions for growth in another segment. While one sell-side firm noted that MSFT’s recent acquisitions represent about 2-quarters of free-cash-flow (i.e. very manageable for cash and free-cash-flow) Activision alone represents 50% of MSFT’s current cash balance as of 9/30/21. Unlike what Ballmer and Gates did in the early 2000’s, it does seem like Nadella is trying to get ahead of the inevitable slowdown in cloud (if and when it should happen).

Last year and last quarter: Looking back at the notes, the December ’21 quarter for MSFT was very strong with Intelligent Cloud growing +23% and all segments generating upside to street consensus. Last quarter, Sept ’21, MSFT saw Azure grow 50% y.y, although the PC segment was the best segment in the quarter, and Cloud saw deferral on two big deals, even though overall the quarter was solid. 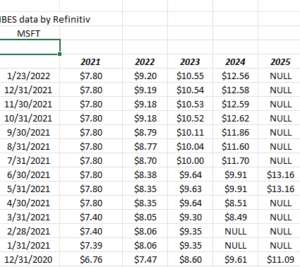 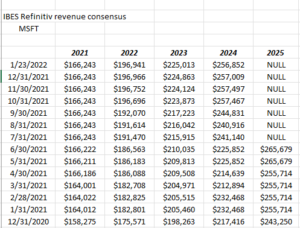 Readers should focus on years fiscal 2022, 2023 and 2024. EPS and revenue revisions remain clearly higher and positive, which is an unambiguous positive.

Clients are long Microsoft but the position has been reduced the last 3 months.

Summary / conclusion: It’s been a monster run for Microsoft since it’s $25 low in April, 2013, and like the IBM comparison, using Ycharts investment performance calculator, MSFT has returned 35% from January 1, 2013 to December 31 ’21, versus the SP 500’s 16.6% average, annual return for the same period. Clients have seen some of their position sold in the last 90 days, trying to balance the capital gains hit in taxable accounts by taking some gains in November – December ’21 and then more in January ’22. Satya Nadella has done an outstanding job during his tenure. The Activision acquisition repositions MSFT in a much better way than Gates or Ballmer did in the early 2000’s. MSFT’s current weight in the SP 500 as of Friday’s close is 5.95%. That’s still a big chunk of the benchmark. Another plus for MSFT is that the 3 segments today all represent roughly 1/3rd of MSFT’s total revenue and operating income, leaving MSFT more balanced today operationally than in the late 1990’s. While Intelligent Cloud is the fastest-growing segment within MSFT (as you’d expect, Productivity & Business is still growing at a healthy rate and the old PC segment is a secular high-single-digit grower both in terms of revenue and operating income) but 10% secular growth for the software giant is inevitable at some point.

Since January 3rd’s announcement that 308,000 vehicles were delivered in Q4 ’21 (+71% y.y per Briefing.com), while 305,000 were produced, EPS and revenue revisions have been fairly steadily higher.

Valuation: No question investors are paying for what is likely one of the most disruptive companies of the next 20 years. Tesla is going to not just disrupt the auto business, but the energy and the utility business as well (particularly energy). Trading at 88x the next 3-year average, expected, EPS growth rate and 24x revenue, Tesla has a valuation that leaves little room for error (i.e. a slowdown in growth). The margin expansion is a huge plus. and that seems to be without the EV credits. Another metric that caught my eye was that when Tesla split the stock, there were roughly 900 million shares outstanding, post-split, and last quarter there were 1.23 billion which means dilution continues to occur and at a pretty significant rate. And yet they still beat the estimates… The cash-flow valuation is equally stunning at 110x and 267x cash and free-cash-flow as of 9/30/21. 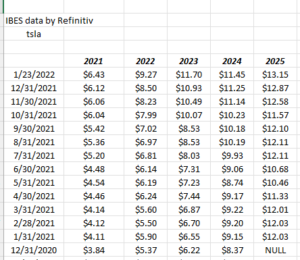 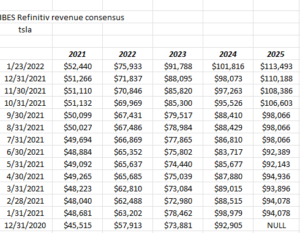 These revisions are another good example of unambiguously positive revisions coming into an earnings report.

Summary / conclusion: Tesla in terms of the mega-caps, is probably the one stock of the “Big 5 – 6 or Top 10” in terms of the SP 500 market cap weights, that has the best secular growth ahead of it. That being said, the valuation leaves no doubt that even though the company can continue to execute operationally, the PE will likely compress at some point and maybe dramatically. In calendar 2021, Tesla traded down from $905 to under $600 by mid-summer on what were very good fundamentals. Readers need to be aware of this. Know what you own…

Of the mega-cap tech stocks, it seems like Apple has traded the best, being down the least YTD in 2022. The December quarter every year is typically Apple’s strongest by a long shot, given the seemingly inexhaustible demand for iPhones and iPads and now the Apple Watch.

Valuation: trading with a high 20x’s multiple and looking at the above expected growth rates for fiscal 2022, readers might be wary, but here’s the valuation and growth story on Apple. The price to cash-flow and free-cash-flow valuations are 22x and 25x respectively “ex cash”. Apple still has $190 billion in cash on the balance sheet as of 9/30/21. 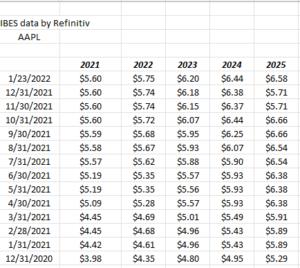 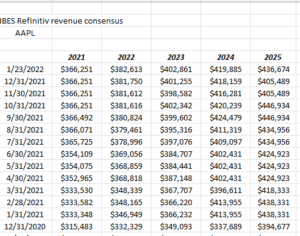 Summary / conclusion: A big chunk of Apple was sold for clients in 2017, about the time that the press and Apple were saying that the iPhone would sell for $1,000 and the trade war with China was kicking in. Obviously, the sale was premature. Apple’s performance – both operationally and financially – has been remarkable. The cash-flow and free-cash-flow generation has been remarkable – more like a software firm – than a tech hardware company. To hedge the Apple sale, some QQQ was bought for clients since Apple’s weight in the QQQ – presently at 12% of the QQQ market cap, has been as high ( i thought) as 20%.

Here’s an excellent post by Ed Yardeni on the “Mega-Cap 8“: Ed’s conclusion is that some “air can continue to come out of the Mega-Cap 8’s valuation multiples without causing an economic calamity”. That is a very good point. Although Ed didn’t bring it up, credit spreads remain benign too. In 2001 – 2002 and then again in 2008 credit spreads hit 14% and 26% respectively, but remain well bid today.

With all the focus on the top 10 of the SP 500, there are so many laggards in the US stock market that either have gotten or are awaiting a catalyst to turn the asset classes from long-term laggards to outperformers. International, emerging markets ex-China, large-cap pharma, etc. etc. are good places to shop for both growth and income.

Take everything you read here with substantial skepticism. Past performance is no guarantee of future results. Capital markets can change very quickly.

The SP 500 and the Nasdaq are at key technical levels. Microsoft is the key report this week, in my opinion. Tesla – thanks to Q4 deliveries – will probably be fine as long as margins are ok, and Apple should be solid. Boeing reports this week too and it’s down from it’s high of $440 in early, 2019. That will likely see better fundamental news over the next year. Clients are seeing it bought for accounts with longer time horizons and patience.

Russia and Ukraine, if that shoe does fall, might help the market get to a bottom quickly like it did in Q1 ’14.