This part II took a longer time coming than what was originally planned, so thanks for waiting. Part I of “Uncorrelated Assets” was written three weeks ago on May 11th, here.

While a better title could have been “Portfolio construction” or portfolio diversification, the process is a little more nuanced than one title can project, since – as an advisor – you want to outperform the benchmark for every client, but also try and mitigate downside in the event of “rotation”.

In March, 2000, everything that has worked for 5 years and produced outstanding returns, i.e. large-cap growth, technology, financials, etc. suddenly stopped dead in their tracks and all the asset classes that had gone nowhere for years i.e. small-caps, international, value investing, commodities, etc. took off.

And therein lies the lesson: last year, on Sept. 1, 2020, many of the SP 500’s “Top 5” stopped dead in their tracks, and after November 1, small-caps, financials, value investing, and all the various asset classes that went flat in mid-April, 2020, started to outperform.

It was just a more condensed and less frenetic version of March, 2000.

Financials: At one point the financial sector was 20% of the SP 500, but “real estate” was created as a separate sector and spun out of financials in 2017 (I think) which was a 3% dent to the market cap, and then 12 years of zero interest rates and the likes of Elizabeth Warren beating the crap out of banks every other week on CNBC, sunk the market cap weight to 10%. 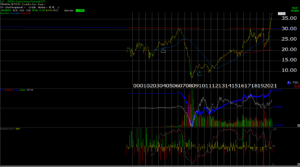 This is a chart of the XLF or bank ETF. Note the break of the 2007 and early 2020 highs near $30, and then the continued move higher. Financial stocks played dead for most of 2020 with zero interest rates and little 10-year Treasury yield volatility, but they moved sharply starting in early November, 2020.

Because of client’s tech concentration in 2020, the way “rotation risk” was managed was to pack financial stocks like JP Morgan (JPM) and Schwab (SCHW) underneath the technology weights so that as tech faded or treaded water, financials – acting as a value sector – help buffer any rotation risk.

As it was large-cap tech stocks and the big winners of 2020 have just traded sideways for the last 6 – 7 months. 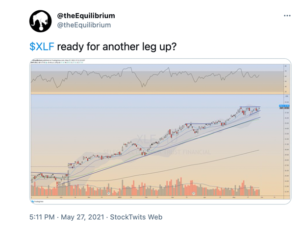 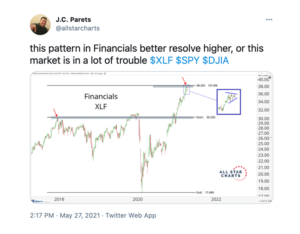 JC Parets noting that the financial sector needs to break this current range that it’s in. (Both of these charts came from the nightly “The Chart Report” which is emailed out to interested readers every week night.)

Fundamentally, the financial sector started out 2021 expecting roughly 20% EPS growth for the sector, but that has risen to 45% as of last week. The beginning of share repurchases, and the loan loss reserve releases are likely to keep coming in the 2nd quarter.

Merck has been rejuvenated with Keytruda, and per Morningstar, Keytruda is expected to be a $25 billion drug. Gardisil is also a key drug for Merck. Keytruda grew 19% y/y in Q1 ’21 but Merck’s issue has been that COVID has shut down or suppressed a number of the product lines due to cancellation of non-elective surgeries.

Pfizer is just the opposite: Pfizer’s vaccine has driven substantial growth at Pfizer. Consensus estimates are expecting 53% revenue growth and 38% EPS growth in 2021, but you can tell from the stock price performance this growth isn’t expected to continue. In fact 2022 through 2024 for Pfizer are projecting y/y declines in EPS and revenue growth so the Street is expecting no lasting impact from the COVID vaccine.

PFE is yielding 4% and MRK is yielding 3.5%. These stocks are almost bond surrogates as everyone reaches for yield in the bond / credit markets.

Client’s position in MRK is much larger than the PFE position, at present.

The most interesting of the above tech names today are IBM and Cisco. Clients can access my individual stock research on www.seekingalpha.com where i do a lot of earnings previews and earnings summaries. Doing the recent earnings preview for Cisco and running the performance for the last 20 years, Cisco has actually been outperforming the SP 500 since 12/31/15. That surprised me. Here is the Cisco preview which Seeking Alpha typically does not like me to copy off their site.

Here is a good chart on IBM from Doug Busch, who occasionally sends me his work. 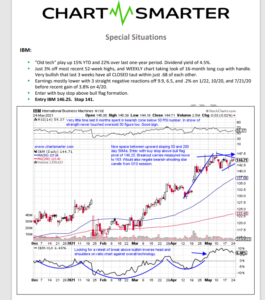 Doug is a good technician and has highlighted some interesting technical points on IBM. The stock is improving it’s technical foundation, but little has changed from a fundamental standpoint.

I’d get interested in IBM on a trade over $150 or the downtrend line off the 2013 high. If I’m a little late that’s fine in terms of buying the stock. Read my Seeking Alpha articles on IBM’s Q1 ’21 earnings preview and the take once earnings were reported.

Intel in my opinion will never be the old Intel. Pat Gelsinger is an evangelical for the company, but the $10 billion in capex required to be spent every year to maintain their leadership in the old PC / server segment seems like a marathoner running a race with a piano on its back. Intel’s business model is exactly like the 1950’s – 1960’s Industrial America which eventually went a way. If Pat can figure out a way to maintain revenue growth and reduce capital intensity, Intel will see a re-birth.

Summary and conclusion: Every market has momentum stocks which get press on CNBC or the proliferation of blogs and are usually subject to big price swings. The point with uncorrelated assets is that these are typically stocks that are out-of-favor, get little interest from the media and are reasonably-valued relative to momentum. IN a one-way market, look at what’s lagging and try and determine of there is a catalyst for the stock. (Easier said than done, by the way.)  One of the best trades for clients for 2020 wasn’t the tech overweight, it was packing value and out-of-favor stocks underneath the bigger weights which reduces drawdowns from sector rotation.

Financial stocks are a substantial overweight today after 13 years of zero interest rates and government intervention on buybacks and dividends.

That’s all for now.

Conditions can change quickly so while I like a stock or sector today, it could  not be the case tomorrow.

Do your own homework and invest based on your own financial profile and risk tolerance.

Write too much today.

Thank you for reading.