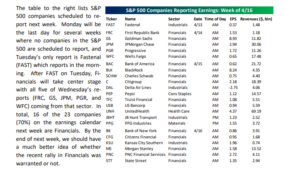 Courtesy of Bespoke, here is a complete list of companies scheduled to report this week. I counted 17 financial sector companies reporting but Bespoke says it is 16 of 23 companies that are from the Financial sector that are releasing Q1 ’21 earnings results this week.

Clients remained overweight the Financial sector for the last few years (between a 12% – 20% total weight), acting as a “value” or non-momentum offset to clients Technology overweight. and that bet paid off in late 2020 as the sector moved sharply higher over the last 5 months, most of the move coming from November ’20 to February ’21.

Here are some brief thoughts and numbers on some of the Financials reporting this week: (Naturally I’m partial to what’s owned for clients, but some other companies will be looked at as well.)

JP Morgan (JPM): JP Morgan reports Tuesday morning, April 14th before the opening bell. with Street consensus currently expecting $3.07 in EPS on $30.5 billon in revenue for expected y/y growth of 294% and 8% respectively. In q1 ’20 JPM reported $0.78 in EPS on $28.25 bl in revenue or a 3% y/y rev decline, so with the capital markets working well, the consumer rebounding already (note consumer credit last week increased $27.6 billion or the largest gain since November ’17 per Briefing.com), so with housing and autos continuing to be strong and high yield spreads tight, the consumer, corporate and capital markets giant should have a great quarter.

The only fly in the ointment was the rise in interest rates and high-grade corporate bond market returns in Q1 ’21. 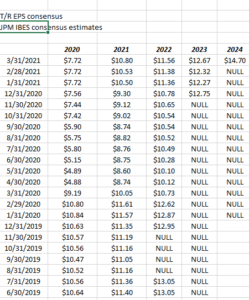 Readers can clearly see the upward revisions to JP Morgan’s EPS estimates after bottoming almost immediately during April – May ’20, although the consensus estimates for forward years are still not back to the “peak EPS” seen in late 2018, early 2019. 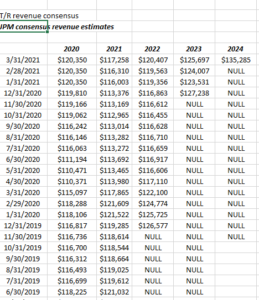 Current consensus for JP Morgan revenue is actually looking for a full-year decline in 2021 revenue of roughly 2% with the Street looking for $118 billion in full-year revenue while 2020’s full-year revenue was $120 billion. While interest rate increases and yield curve steepening could cause some high-grade bond issuance volume to slow, the capital markets still have a healthy tone into 2021. Personally I’d be surprised if JP Morgan couldn’t exceed 2020 revenues nicely by year-end 2021 and show y/y growth.

JPM is trading at roughly 13x EPS for 27% expected EPS growth in 2021 on a decline in revenues of 2%. One of those metrics – expected EPS growth vs expected revenue growth – is probably not right and I’m looking for a gradual increase in 2021 revenue rather than a sharply curtailed EPS growth rate. The stock is not expensive on a PE or PEG basis, but it is saltier on a book value and TBV basis. The regulatory cuffs still have yet to come off on the “capital allocation” plans, which means we will likely see stock repurchases and dividend increases before the summer is out.

Client’s saw a swap from some bank ETF’s into Goldman in July, 2020, since capital market conditions seemed more favorable to Goldman than the banking sector (IPO’s, credit spreads tightening, high yield issuance exploding) but the stock really didn’t move until late 2020 like the rest of Financials. Goldman was sold in February ’21 near $287, and the bank ETF’s were repurchased, given the risk – reward, but when Goldman reports Tuesday morning April 14th, before the opening bell, it should report another strong quarter. The nice thing about Goldman is – given the volatility in the stock – readers / investors should get another chance to repurchase a quality banking franchise, often times at or near book value, but you need to be able to live with that volatility. 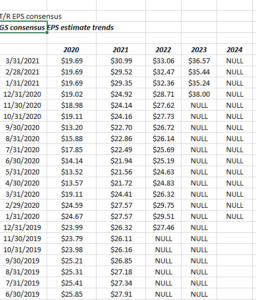 A longer article on Goldman is being prepared for publication on www.Seeking Alpha.com, so this is a quick preview for Goldman. 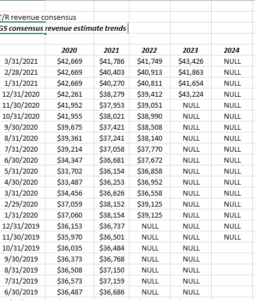 Like the EPS consensus, Goldman’s revenue consensus continues to move higher supported by the same financial and Fed backdrop that is supporting JP Morgan.

Charles Schwab (SCHW): The TD Ameritrade merger is in full swing and Schwab has noted in the quarterly commentary full integration should take around 18 – 24 months to complete. The merger places Schwab in the “mega” asset managers with Blackrock, Fidelity, etc. and management assures investors the deal will eventually be accretive to EPS.

Coming into the merger, Morningstar estimates Schwab’s “net interest income” will account for 75% – 80% of net revenue, and with the TD Ameritrade cash balances, while that percentage could remain in place, the total earning assets will rise substantially. 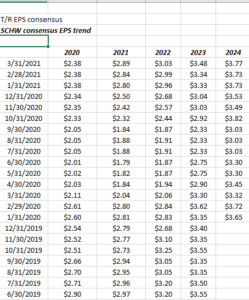 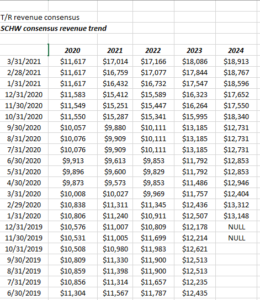 Readers should note the big increase in the 2021 – 2022 columns. The Schwab – AMTD merger was announced Nov ’19, but the merger didn’t close until early in October, 2020, so if readers want to see the influence on the financials note the sharp increase in revenue estimates in October 2021 and forward years.

Schwab’s fundamentals warrant a longer article on www.seekingalpha.com but it will be done after earnings. For now, blog readers should note consensus 2021 full-year EPS and revenue estimates are expecting a 49% increase in revenue to $17.4 billion and $3.01 in earnings per share for a 24% y/y increase, both heavily impacted by AMTD’s consolidation. In Q4 ’20, Schwab did not report pro-forma or organic growth outside of “net new asset growth” (which is done every quarter) so Street research has to be relied upon to see what’s organic growth and what isn’t. Current consensus around 2022 revenue and EPS growth is looking for 2% revenue growth and 6% EPS growth next year. If investors “average” current 2021 and 2022 consensus, the Street is looking at 25% revenue growth and 15% EPS growth for a stock trading at 21x forward earnings. While “financial” stocks dont typically trade or are valued off free-cash-flow valuations but rather “capital adequacy, since Schwab doesn’t do any proprietary trading or take much “market risk” with the balance sheet, the “financial platform” that is Schwab, much like the exchanges. leads me to beleive that free-cash-flow measures aren’t irrelevant, so the 6% free-cash-flow yield on SCHW exiting the December quarter, shouldn’t be ignored.

No question it appears SCHW has excess capital to return to shareholders, and over the last 20 years, SCHW has never been big share repurchasers. Like many financials, once the regulatory cuff’s come off – probably this summer – Schwab could repurchase some shares and offset some dilution shareholders have seen over the years.

Mr. Schwab is one of the original disruptors after the “Big Bang” in the early 1970’s when brokerage commissions were deregulated. Some of the moves in the 1980’s were brilliant, not the least of which was offering advisors Schwab’s platform in the late 1980’s as a “3rd party custodian” which removed a significant regulatory burden from small (and even big) advisors. Recent negative press about the Schwab support or service teams and long wait times on hold are somewhat accurate (sometimes much longer wait times for a service rep) than not, but Schwab is also trying to hold the line on operating margins within the institutional segment and onboarding all the AMTD advisors has to be a ton of work. Although I was a tool in the 1990’s with the Schwab support team in the 1990’s, losing my temper, being impatient, over the years I have found Schwab’s service teams to be nothing but professional, competent, and completely helpful for resolving issues. (Having had cancer twice, and living through the two 50% corrections in the SP 500 in the 2000 – 2009 decade, will mellow someone quickly).

Regarding the negative press around Schwab and the consolidation, etc. “this too shall pass” is the best approach.

Since bottoming in the low $20’s last fall. Wells has traded up to the low $40’s on the financial sector rally. If there is one stock that I get asked about repeatedly, its Wells and since the “multiple accounts” issue under Stumpf, and after selling the stock in the low $40s years ago on the bad press around the multiple accounts fiasco, it’s never been repurchased for clients.

At one point in the early part of last decade, 2010 – 2013, Wells was accounting for almost 1/3rd market share of all mortgage refinancing’s, which is significant net interest margin risk with a 55 basis point 10-year Treasury yield. It’s clear like a lot of financials, that the sharp yield curve steepening since last fall has helped the stock price, but is it correlation or causality ? 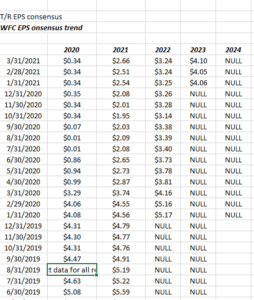 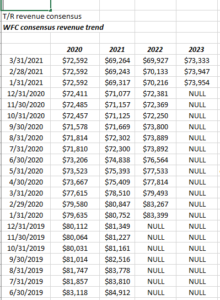 Peak earnings for WFC in the last decade or rather last 11 years has been between $4.00 – $5.00 per share (according to Refintiv Eikon data), and the recovery in the stock since last November already discounts much what was “peak EPS” even though current consensus for 2021 and 2022 remains well below that level. Granted I thought I read that Wells sold off it’s money management arm, but i didn’t think that that particular division contributed all that much to Wells bottom line.

I have no opinion on the bank today or the valuation. Some like the new CEO who is trying to reshape the brand and dig it out the hole Stumpf created.

The reduction in the annual dividend from $2.00 to $0.40 a share in early 2020, was no doubt a blow to shareholders and probably accounted for much of the stock price drop into the low $20’s.

Conclusion / Summary: In updating readers on clients Top 10 Holdings early last week, as we exited the first quarter, 2021, JPM Morgan and Schwab remain the two largest financial positions, with the Chicago Merc (CME) being the 3rd largest position and then Berkshire Hathaway (BRK.). A lot of analysts are talking “peak financials” into Q1 ’21 earnings this week, but while the sector has had a remarkable run since November ’20, the valuations are not necessarily unreasonable, at least the financials this blog updates quarterly. A steeper yield curve will definitely help, but so will stronger economic growth and a consumer that wants to spend, as the $27 bl jump in consumer credit demonstrated.

The improving US economy, the flush consumer, expected 5% – 6% GDP growth in 2021, a steeper yield curve, buybacks and dividend increases possible later in 2021, all are good reasons to look at the financial sector in the event of sector or market weakness in Q2 ’21.

Thanks for reading, Evaluate all market info relative to your own financial profile and risk tolerance.