With the turn into the new quarter on April 1, normally IBES by Refinitiv provides the “bottom-up” quarterly estimates for what is calendar 2022, however they did not provide that data on either April 1 or April 2, last week, so hence the “ish” on the new forward 4-quarter estimate.

Once IBES provides the bottom-up quarterly EPS estimates for next year, 2022, we’ll know the exact figure.

The $180 ‘ish number is probably too low since the “normal” dollar increase as we roll into the new quarter approximates a $5 – $6 increase typically, so that should put the exact figure once we know it between $180 – $181.

Once the 2022 bottom-up quarterly estimates are posted, this blog will be updated. 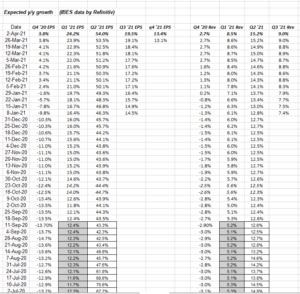 This spreadsheet, which was created from the IBES by Refinitiv data shows the forward quarters “expected” EPS and revenue growth rates for the SP tracked on a weekly basis.

While revenue growth has stalled for now, the SP 500 EPS revisions continue to be revised higher for forward quarters in 2021.

As Martha would say “that’s a good thing”.

While I wanted to show readers the “upside surprise” factor in SP 500 EPS earnings (section 12C) by quarter since the pandemic struck, it was also worth showing the “beat rates” for the entire quarters as well. (Section 11C).

The sell-side analyst community has dramatically underestimated the strength of SP 500 earnings since the pandemic struck.

It’s really been the case since the 2008 Financial Crisis too. Analysts are people too and when you live through brutal bear markets, it leaves a mark.

Summary / conclusion: Interesting comment by Blackrock’s Rick Rieder on his monthly bond market conference call held Thursday morning, April 1 at 7 am central. Rick noted that fully 1/3rd of the money in circulation today has been created after March, 2020, or after the pandemic, which gives you some idea of the amount of monetary stimulus Jerome Powell threw at the US economy beginning in April ’20, and that doesn’t include the fiscal stimulus still being played out.

Looking at the first attached spreadsheet, the upward revisions to SP 500 EPS expected growth rates is a plus, but I wonder how long that lasts with tax hikes.

President Biden has said that no American making less than $400,000 will see higher personal income tax rates (although another article said that has been revised lower to $200,000) but every American with a 401k plan regardless of their salary will see some impact in the corporate tax rate since a lot of that money is “indexed” investments and an increase in the corporate tax rate will see a reduction in SP 500 EPS estimates.

This is very quick back-of-the-envelope math, and more work needs to be done.

Maybe a higher effective corporate tax rate means nothing, but when the TC&JA (Tax Cuts & Jobs Act) bill was signed in December, 2017, the SP 500 had risen 21.8% that year, and that was even with fed funds rate increases that started almost immediately after President Trump was elected in November ’16. (If memory serves, Janet Yellen put the first fed funds rate increase through in December ’16.)

The hard data will be published as soon as it comes down from IBES by Refinitiv on 2022 bottom-up EPS estimates for the SP 500.