Moved out of Chicago in 2019, to the western suburbs, near where i went to high school. As a workout fanatic, joined the local UFC GYM for both brazilian jiu jitsu and intense cardio training. Wound up with a 26-year old trainer who was taking me through a cardio-intensive workout and we are listening to the music track over the weeks and it’s always a milder form of “gangsta rap”.

Me: “Don’t you ever wish they’d play a little Bruce Springsteen ?”

Me: (Faceplant on the sled track).

The Genius of Mr. Buffett

Never being too terribly bright, my own history of thinking of Mr. Buffett was in the late 1980’s and early 1990’s when i was just getting into the business, and finishing the CFA exams, I thought “he’s kind of an old man and a little out of touch”. Then in the early 2000’s, I thought “well, maybe there is some merit to how he invests”, then in the late 2000’s and earlier this decade.After rereading all of his biographies such as, The Making of An American Capitalist” and most recently “The SnowBall”, not to mention many of the books which detail the particulars of his investment discipline, please just call me Forrest, and “stupid is as stupid does”.

Youth really is wasted on all the wrong people as “A Wonderful Life” notes.

What prompted this was thinking about Apple (the company and the stock). Mr. Buffett didn’t START buying Apple until 2017, missing the initial 17-year bull market in the stock, and it took me a while to realize what I think  Warren was thinking on the stock. As a “tech hardware” business where there is a constant pressure on pricing and margins not to mention saturation in the market for iPhones, he might not have been that interested since earnings and cash-flow growth must then be driven by price increases (remember the $1,000 iPhone rumors ?), which is completely antithetical to tech hardware since Moore’s Law reigns supreme. Waiting for 5G and it’s eventual roll out, I recently went into an Apple store in Oak Brook, Illinois and bought an iPhone 10R for a very reasonable price, and for far less than $1,000. (The service and technical support was truly phenomenal. Can’t say enough about the patience and professionalism of the store’s support staff.)

As a big fan of CNBC’s Shark Tank and Marcus Lemonis’s “The Profit” what struck me in a recent episode of The Profit – the Macaron Queen – the mother who had a history of heart issues, was wearing the Apple Watch to track her heartbeat. Granted a lot of devices do that today but the Apple Watch was featured prominently when she got excited or stressed and needed to rest. I keep asking my own internist at Northwestern Memorial Hospital in Chicago (one of the finest institutions in the world of any kind) whether he is seeing widespread adoption of the Apple Watch as a data transmission device for doctors to track patient health, and he says no, but I can’t help but think think this is inevitable. That was my biggest fear about selling the stock – the health care sector is a massive and entirely new highly lucrative vertical for Apple and Apple Watch to penetrate.

It’s still a calculated guess but it’s more obvious that Mr. Buffett bought Apple when he did knowing the transition to the higher-margin Services business would expand margins and make the stock less cyclical and more importantly, expand Apple’s valuation.

Morningstar still had a “narrow moat” designation on Apple as of the end of the Sept ’19 quarter, but i wonder if eventually that becomes a “wide moat” under the Services business.

The bull market of the last decade is nothing like the frenzy of the late 1990’s. This bull market seems tame by comparison.

When most people think of Apple genius they think of Steve Jobs, but don’t diminish what Tim Cook has done as CEO. Like the lesson with GE, sometimes a successor CEO that follows a generational leader can do a great job simply by keeping the company on track. Tim Cook is responsible for the transformation of Apple’s business model to tech hardware to Services as the rest of the world now knows what they are up to. It’s not an easy task. Tim schmoozed President Trump too during the tariff uncertainty, keeping Apple foremost in the President’s mind. That couldn’t have been easy.

The store experience at Apple is still hugely positive. That’s a plus.

So far, Tim’s avoided all the icebergs.

For clients, balanced portfolio are run with tactical allocations to equity vs fixed income weights. Obviously, given the low level of absolute interest rates since ’08 the equity weighting has been overweight but its been coming down gradually as the secular bull market evolves. The one expectation I’ve had in the last 10 years is that interest rates would / should have risen sharply with the return of US growth, and that’s been flat wrong.

Being wary of irritating the regulators, i hesitate to post the top holdings, but as you can see from this early June ’19 post, the holdings have changed little. If you’ve read this blog regularly, readers know the top 2 holdings have been Microsoft and Schwab for years. Turnover for the majority of clients accounts is usually below 10%, and capital gains are managed religiously.

All returns posted are “annual” returns for the individual stocks thus client returns may vary based on weights and other individual client factors.

Client performance is reported on a “time-weighted” basis net of fees and commissions.

As the old saying in golf goes, “you drive for show, but put for dough” and in investing, “you buy for show, but sell for dough.” The sell decision is steeped in far more complexity and uncertainty, than purchases for client portfolios. With buys, the stock or position can be averaged down or today, with zero commissions, quickly eliminated entirely. The sell decision – particularly given the capital gains tax within taxable accounts – creates far more sources of discussion for clients, which can be mine fields.

Howard Lindzon’s blog had an interesting take on “selling” this weekend.  As Howard Marks once said about selling Cisco in the 1990’s, ” I could have done a better job for clients, if I’d gotten up and gone for a walk.”

Money’s CNN Fear & Greed measurement and graphs has a lot of peoples attention.

The US stock market is reflecting “extreme greed”. 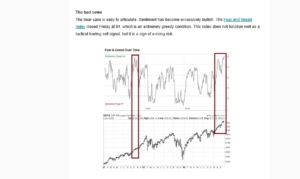 Remember, according to Dr. David Kelly and his team at JP Morgan’s Economic Research, the “average” correction every year for the SP 500 is 13.5%. ( Will attach the graph from JP Morgan’s Guide to the Market sometime in the next few weeks.)

Summary / conclusion: The odds of a US recession remain quite low (December payroll report comes out this Friday, January 9th), while the odds of a US correction in the stock market seem to be rising. A 5% – 10% correction would completely wipe out any individual investor optimism and bullishness if the pattern of the last 10 years still holds.

This is still a secular bull market in US equities.

Take everything in this blog each week with a grain of salt and an ample dose of skepticism. It could all change tomorrow.

Thanks for reading. My personal email is brianglm@trinityasset.com.