Great article by Josh Brown this Sunday, November 25, 2017. This blog post of last weekend hinted at this, but Josh more thoroughly flushes it out.

Market breadth is extremely important – ignore it at your own risk.

This morning’s blog post talks a little about the relationship between earnings growth and the SP 500 return with the two being highly correlated according to investors like Jeff Miller, a very popular blogger who writes the “Weighing the Week Ahead” blog at his firm, NewArc Capital, in Naperville, Illinois, and Ryan Detrick of LPL Financial, a very good technician who follows such stats.

P.E “expansion” is a hallmark of bull markets, and makes the SP 500 look expensive while it is happening.

In Bob Woodward’s book, “Plan of Attack” written about the Bush 43 Administration’s planning and methodology for Gulf War II which began in March, 2003, Colin Powell, then Secretary of State, referred to Vice President Dick Cheney as having “the fever” for invading Iraq, a term used several times throughout the book.

I graduated from undergrad with a newly minted Finance degree in 1982, and saw the 1982 – 1999 US equity bull market almost in its entirety, despite not getting a job in the industry until 1990.

The one aspect to the stock market that struck me about the 1990’s, and mostly the late 1990’s – beginning with 1995 when Trinity hung out its shingle – was the feverish pace of the rally, and the binary nature of the market, particularly after 1997, when you either won big in terms of equity market returns with large-cap growth, or your stock portfolio went nowhere. (From what I remember of the late 1990’s, breadth started to weaken in the late 1990’s, really around 1997 – early 1998 – and the mega-cap’s dominated the SP 500 from that point forward. The top 10% – 15% of the SP 500 accounted for roughly 75% of the return of the benchmark by the late 1990’s.(

Here is the point:

When I compare this market to the 1990’s, Financial’s are much less “participatory” and the degree of capital within the financial system seems more disciplined than in the 1990’s heated market, and “the fever” that existed in the late 1990’s, particularly during the period from 1995 – 1999, when the cumulative return on the SP 500 was roughly 125%, seems entirely absent. 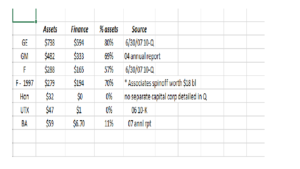 Although its a sad commentary on my social life, a few minutes were spent this morning looking at the 10-Q’s from prominent Industrial and Consumer Discretionary names of the 2000’s. As an analyst / portfolio manager that spends a lot of time doing “bottom-up” homework on the financial statements of all names owned for clients, one thing noticed over the years was all – or many – of the Industrial sector components have “capital corporations” or captive finance subsidiaries.

Ford spun-off Associates in the late 1990’s – fortunately – thus reducing Ford’s consumer finance exposure, and possibly one of the reasons Ford managed to survive the Financial / Mortgage / Housing Crisis of 2007.

Even WalMart at one point wanted to start a “bank” and applied to the FDIC for a charter.

The “fever” of the 1990’s bull market could have been a function of an excess of financial sector capital chasing investment opportunities.

One painfully obvious aspect to my list is all the companies I missed, but think about this: add GE Capital, GMAC,Ford Motor Credit, Boeing Capital (admittedly small and Boeing handled the downturn well) and the true “Financial” sector was likely much bigger than the 27% – 30% of the SP 500 when the sector came apart in 2008.

As someone who graduated from college in 1982, and business school in 1985, and studying Finance the whole time, who saw the deregulation of the Financial / Banking sector that started in the early 1980’s under Ronald Reagan, you could make the case that the 1980’s, 1990’s SP 500 bull market, powered by Technology and Financial’s, was merely just P.E expansion based on an expanding Financial system and bad capital chasing worse opportunity.

And while I didn’t agree with Dodd-Frank and CCAR in its totality, and the treatment of the banking system like a escapee from a maximum-security prison, the fact is some of it should remain.

Conclusion: The Financial sector matters greatly to the US economy and the US capital markets, and its more rational capital allocation and discipline today may be one reason we don’t see “the fever” in the US stock and bond markets today. Even after 2007 – 2008, and even after spinning off Real Estate into the 11th SP 500 sector, Financials are still the 2nd – 3rd largest sector in the SP 500, going back and forth with Health Care.

While this is hardly the sole reason for a more rational bull market today, as well as investor sentiment (and some surveys are very bearish like AAII, while the newsletter group is very bullish), I thought it worthy of a discussion with regular readers and commentators. (I would like to expand the above list that constitute “non-bank” finance, so if you read this and you know of a company at that time that wasn’t a Financial sector component, but had a large captive finance subsidiary, please shoot me a note.)

The above is strictly an opinion and something Ive thought about over the years. The Financial sector may have been much bigger than we thought by the end of 2007.

“The fever(ed)” bull market of the 1990’s seems to be completely absent today.

The Financial sector is about half the market cap of the SP 500 than it was in 2007.