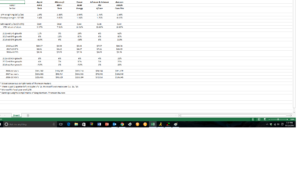 Readers that have a bearish tilt or have a penchant to want to short the market, constantly voice skepticism around SP 500 earnings growth after four consecutive quarters of negative earnings growth and barely positive revenue growth, and I agree except that, outside of two sectors, which now have bottomed (or looked to have bottomed) the SP 500 remains in decent shape.

Apple and Microsoft are over $1 trillion in market cap by themselves, or roughly 6% of the total SP 500.

As has been written on this blog many times in the past, the influence of Energy on the SP 500 is significant. Just look at Exxon’s (XOM) numbers: if we excluded XOM’s 2016 data, the top three stocks would “average 7.5% EPS growth and -2% revenue growth. Excluding XOM, 2017 “expected” EPS and revenue growth is 9% and 5% for the other 3 stocks, and these numbers look far better if Amazon is included.

To be frank with readers, I drew a different conclusion after posting the data than what was my expectation coming into the article. Exxon-Mobil’s stock never really reflected the sharp deterioration in EPS and revenue growth from “peak” earnings to today’s EPS expectation. At it’s peak in 2012 and 2013, XOM earned about $8.50 per share, in 2016 Exxon will earn $2.50 per share (roughly) and yet the stock peaked at $105 and it trading at $88, so earnings fell 75% and the stock price fell 15% from their respective peaks.

What explains that disconnect ? Liquidity ? The dividend yield of 3.5% that is safer relative to the rest of the sector, etc ? Has Exxon already discounted a crude oil recovery ?

Excluding market cap, if we were to sort the SP 500 by “earnings weight” the top 5 stocks in the index, here is what we’d have:

This must be pointed out to readers too given the numbers, 2017 looks very healthy, particularly for Energy.

The negative sentiment around the markets continues to amaze me, and leave me feeling optimistic around “expected returns” for the SP 500 for the next 18 months.

(If readers are having trouble seeing the spreadsheet, let me know.)