That is what worries me – Apple is falling into the kind of growth pattern usually seen in the Consumer Staples sector.

For 2016 Apple is looking at its first year of negative revenue growth at -8%.

Also to show readers how ThomsonReuters consensus Street expectations data is used, this is what is worrisome about Apple’s fiscal 2017: FC – Apple72416blog post.

Expectations are pretty low for the iPhone 7 launch scheduled for release in September ’16. 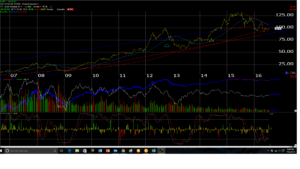 Looking at Apple’s longer-term weekly chart, the stock remains above its long-term trend-line off the March, 2009 low and is now oversold on a weekly basis. This is the the first time Apple has reached an oversold level on the weekly chart, since it fell from $100 in late 2012 (split-adjusted) to $55 – $56 in mid-2013.

Valuation: Apple’s stock has always looked cheap – I told clients during its big run after 2009 that if Apple was ever valued anything close to what the large-cap tech stocks looked like in the late 1990’s it would have had a $1 trillion market cap. Apple is trading with an 11(x) – 12(x) P.E ratio with negative growth this year, and a 2.3% dividend yield.

Conclusion: Yesterday, in the SP 500 Weekly Earnings Update, the importance of Apple’s market cap and revenue weight to both the SP 500 and the Tech sector were discussed. Years ago, when I wrote for TheStreet.com, there was a guy on the site by the name of Jordan Kahn, who lived in LA and started Kahn Asset Management. Jordan was a sharp kid, good investor and very articulate writer. He told his clients and readers that his investment style was three-pronged: fundamental analysis, technical analysis and sentiment-driven. For the long-only crew in the 1990’s that were burned by the bear markets of 2001 – 2002 and 2008, technical analysis gives an investor an unbiased and unemotional entry and exit point for stocks. The technical’s usually turn before investors see a change in fundamentals. Sentiment is so important too – the point that over the years, I’ve drifted into using Jordan’s methodology without really realizing it.

Here is a quick look at Apple using that “KAM” three-pronged approach:

Apple fundamentals: no question stock looks cheap,but the negative revenue growth and gross margin pressure as well as continued pressure on fiscal ’17 numbers has kept me from adding to the stock under $100. Might Tim Cook and the management team give an early peek at ’17 numbers ? The update and full-year guidance for fiscal ’17 (starts Oct 1 ’16) likely wont occur until the October ’16 earnings report. The continued pressure on 2017 EPS and in particular revenue estimates, are worrisome. Apple’s forward estimates were cut dramatically after the Jan ’16 earnings report (see the above-linked spreadsheet) and have not reversed course yet.

Apple technicals: The uptrend off the March ’09 low is still intact but Apple needs to trade above the May and July ’16 highs over $100 and then again the stock needs to break the downtrend line from the $135 highs near $105. A heavy volume trade above $105 and the stock has found new life. The stock is oversold at these price levels.

Sentiment: per Schaeffer’s Investment Research, the options setup on Apple indicates 2(x) the amount of call-buying (relative to put buying) although open-interest is small. While the expectations are very low for the June ’16 quarter to be reported Tuesday night and for the September ’16 quarter, Schaeffer’s closed their Apple earnings note with “and regardless of the stock’s initial directional move, the litany of challenges outlined above would suggest the odds of a meaningful bullish turnaround are vanishingly small.”

Apple has always been an earnings and revenue-momentum stock, and like late 2012 and early 2013, when the estimates have stopped rising, Apple’s stock has traded lower.

What I worry about is that with the stock being a market leader from roughly the end of the tech bubble in March, 2000 to mid-2015, Apple’s “leadership” as a high-quality growth stock are now over. It is exceedingly difficult to move the needle at even 10% – 15% revenue growth for a company like Apple with a market cap of roughly $540 billion.

I thought Tim Cook has done a good job to try and avoid the mistakes of the large-cap tech giants of the late 1990’s by developing the Apple Watch, and looking at areas like Apple TV, iBooks, and even the Apple car, which may have been less about manufacturing a new automobile and more about gaining mindshare control of the dashboard, but so far the R&D hasn’t materialized into meaningful non-iPhone or core product growth. The fact is Apple is still the iPhone company, and the iPhone 7, while a decent product, may not have the gravitas to generate the upgrades the iPhone 6 did.

The game-plan before Tuesday night is uncertain right now. Some Apple might be trimmed in tax-deferred accounts just to take some gains off the table. A heavy-volume trade below $92 and – despite the valuation – the market is telling investors Apple has longer-term issues.