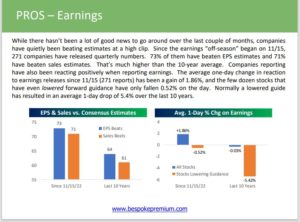 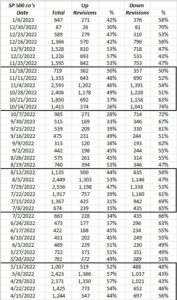 The SP 500 earnings picture is truly complicated right now, but the seven banks and financials reporting on Friday will kickoff Q4 ’22 results and give us a good luck at bank capital, credit provisioning, net interest net interest margins, and  – through corporate loan growth – a look at general business activity.

JP Morgan (JPM) is expected to report $3.10 in EPS on $34.3 billion in revenue for expected y.y growth for the banking giant of -8% and +17% respectively. The pressure on EPS is probably coming from the expectation of increased loan loss reserves, as Jamie Dimon’s “economic hurricane” comments from early 2021 led investors to think that perhaps a repeat of 2008 was at hand, but obviously the economic data and consumer balance sheet condition has remained supportive of bank credit (so far). 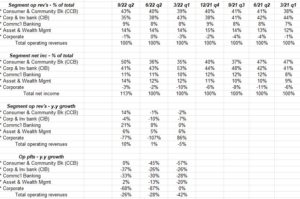 Readers can see the bottom lines of the table and the y.y growth in both operating revenue and operating profit.

The capital market segment of JPM is the corporate and investment bank, which is anywhere from 35% to 45% of total revenue, saw operating profit fall between 26% and 37% this year, which is understandable given the capital markets.

From a valuation perspective, JPM is trading at 11x forward earnings for an expected decline in EPS in 2022 of -24% after 2021’s +72% EPS increase. The stock is moving back into “fairly valued” range around $150, but a lot depends on the type of capital market conditions seen in 2023. “Peak EPS” for JPM was 2021’s $15.34 and that was SPAC and monetary-policy induced or enhanced earnings growth, so the fact that JPM is expected to print $11.65 in 2022 is pretty impressive. Buybacks are expected to resume in the first half of ’23 and the dividend is due for an increase as it’s remained stable at $1 per share for the last 7 quarters as JPM works to build up it’s Tier 1 capital ratio to 13%. (The dividend today is roughly 25% to 27% of JPM’s trailing twelve-month EPS.)

The June and September quarters of ’22 saw JPM trading at it’s lowest price-to-book and tangible book in the last 2 years.

Maybe even more interesting is that in Q4 ’21, JPM’s EPS fell 11% y/y, while revenue was flat so JPM has easy compares over the next few quarters.

Summary / conclusion: Looking back at the notes from 2020, JPM announced a pandemic-driven $6.8 and $8.9 billion credit reserve in each of the March and June ’20 quarters. The interesting aspect to JPM’s Q3 ’22 call was that I thought I read Jamie Dimon say that if the national unemployment rate hits 6% in a recession, the bank would add $5 – $6 billion in credit reserves.  Listening to the latest Fed comments and commentary, the Fed is now expecting a 4% – 4.5% unemployment rate in the expected soft landing in 2023, from which we could assume that JPM will lower their expected credit reserve.

However this is all a guessing game right now. The US economy has consistently come in stronger-than-expected in the past 6 months.

The stock remains one of clients Top 10 holdings and has been for the last 3 – 5 years. I do think we will hear better news on Tier 1 capital in 2023 which will drive the buyback and dividend increase, and the prospects for credit reserves seem diminished today than just 6 months ago. 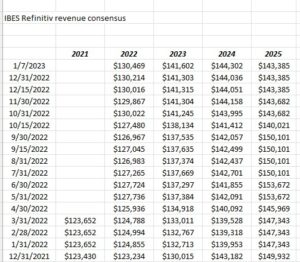 The one unambiguous positive to JPM is the steady increase in positive revenue revisions, but these get muddled by EPS forecasts which are trying to quantify potential credit losses from a hard recession to a mild soft-landing.

A trade in JPM down to the low $120’s under current conditions would see more added to accounts, and a trade up to $170 – the old 2021 highs – would likely see the stock trimmed or the weighting reduced, assuming the current macro-economic environment remains stable.

Relative to JPM, BAC’s capital markets segment is a little smaller in size, accounting for about 1/3rd of BAC’s revenue and operating income respectively thus BAC is more of a traditional bank but the fee pressure on the mortgage business and some of the interest rate sensitive business is similar to JPM. In Morningstar’s analysis of BAC, the Chicago firm did think that BAC’s net-interest-income will grow 23% in 2022 and 14% in 2023.

Technically the stock has not traded back above it’s 200-day moving average yet, although it’s close, but it has come off it’s consolidation in the low $30’s.

Summary / conclusion: BAC is probably more favorably valued than JP Morgan at this point, but BAC’s earnings growth is likely more consistent and stable than JP Morgan’s. Return-on-equity the last few years has been pretty around the same with BAC in the low teens and JPM in the mid-teens. BAC is expected to repurchase stock again in ’23. The way I think of these two banks is that if you think the capital markets will have a better year in 2023, particularly the bond markets, you’re probably better off owning JPM, while if you think 2023’s markets and economy will be much like 2022, then perhaps BAC is the big bank of choice. 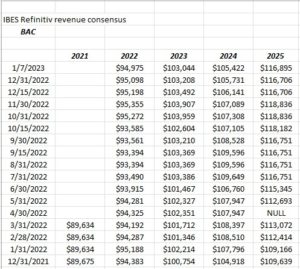 One data point that caught my eye was that BAC’s revenue estimate revisions were not nearly as robust as JPM’s.

Citi is a small holding because the fly in the ointment so to speak is that 2023’s expected EPS of $6.30 is lower than 2022’s expected EPS of $7.03, thus the sell-side is expecting another tough year of earnings growth, even after C earned $10 per share in 2021. In addition Citi’s ROE is roughly 7% – 8% thus it’s almost half of BAC and JPM although these are different banks under the same umbrella.

The positive aspect to Citi and the reason A-plus value investors like the Oakmark Fund and Berkshire Hathaway have taken a position in the shares, is Jane Fraser, the new CEO who came out the wealth management division and seems very highly regarded. Jane is trying to shrink the global footprint of Citi and improve returns over time. Although I can’t recall the source of the article, Citi also needs to boost capital and make sure the $0.51 dividend the last 8 quarters (4.25% current dividend yield) can help sustain interest in the stock.

Jane has her work cut out for her. We’ll see what Q4 ’22 results look like on Friday morning.

If readers are wondering what would be the catalyst to own more shares of C, the trend in 2023 EPS revisions must turn positive: 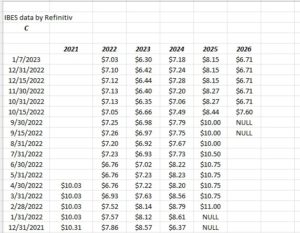 Eventually Citi has to start growing.

While clients have never owned Blackrock’s stock, the stocks is still down more than $200 from it’s November ’21 high of $973, closing up over 5% to $738 Friday, January 6th, on above average volume. 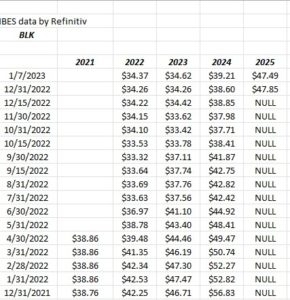 After falling rapidly in the first 6 months of 2022 it looks like BLK’s EPS bottomed from July – October ’22 and have started to improve the last 3 months. 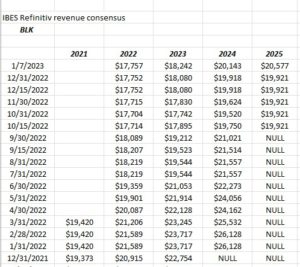 Revenue estimates for Blackrock are a little less conclusive but at least they look like they have bottomed.

Summary / conclusion: Other than Goldman Sachs, if there is one stock that would benefit from a rebound in capital markets in 2023, Blackrock would be it. Having exposure to equity and bond markets and the iShares franchise, Blackrock wins on many levels with even just a modest 10% / 10% returns for stocks and bonds this year.

Summary / conclusion: First, looking at the sector fundamentals, from a credit perspective, credit card chargeoff’s and delinquencies remain subdued. Watching credit card delinquencies is often an early-warning indicator since credit cards are unsecured debt and thus if the consumer gets into solvency issues, the credit card debt is often the last to be paid, since there isn’t an asset like a home or car attached to it.

The fact that the US economy continues to chug along at a rate above stall-speed continues to be a positive for the banking and financial system. Consumer credit comes out on Monday, January 9th, 2023. The prior number – which will be revised – was $27 billion in November, while Briefing.com’s consensus estimate is for $23.5 billion for December ’22 and Briefing.com’s forecast for December ’22 is looking for a smaller $19.0 billion.

The real metric though will be the addition to loan loss reserves by JP Morgan, Bank of America and Citigroup. That will tell us much about how the big banks are positioning for 2023 and any recession. The thing is, the loan loss reserve will likely be less than what was being contemplated 6 months ago, given the persistent strength in the US economy, although probably a little more than the US economic data might suggest, to protect the banks from a regulatory perspective, and given the unprecedented 4 75 bp fed funds rate increases by the Fed.

Net-interest-income / margin: should be a clear positive for the financial sector overall.

Corporate loans / lending has been holding “mid-single-digits” all year. No reason to expect anything different.

Capital: JP Morgan and Citi have to boost Tier 1 Capital, (JPM less than Citi) while Bank of America looks to be ok in that regard.

Regulatory: There was a new bank regulator named in early December ’22 and it mainly went unnoticed except for bank stocks traded poorly around the announcement. Without giving away my political leanings, regulators love to regulate, and – even though the banking system is probably in the best capital position it’s been in for 22 years – regulators will probably tighten the noose somehow.

From the bigger picture perspective, the pandemic drive huge additions to loan loss reserves in 2020 and then these were all reversed in 2021, and 2022 was going to be the first stable year of operations for the banking system until the FOMC and Jay Powell intervened with 4 75 fed funds rate increases, so the sector has required patience to remain invested. The EPS volatility was significant, which impacts capital and gets the regulators all fired up, looking for problems.

The closer the Fed gets to a real “softer landing” with demand softening and inflation continuing to fall, the greater the financial system will benefit.

Really the banking system would benefit from one or two years of economic stability.

With good capital market returns and a real soft landing in 2023, expect JP Morgan and Blackrock to outperform. If 2023 looks like 2022 from a Fed liquidity perspective, expect Bank of America and Citi to be safe havens within financials.

Like everything else in this business, “it all depends”.

(This preview of the Friday financial reports, some of which are not included is simply one opinion. All consensus estimates are sourced from IBES data by Refinitiv. The one thing you can be sure of is that capital markets can change quickly both to the upside and downside. Past performance is no guarantee of future results and the actual results may not be updated.)