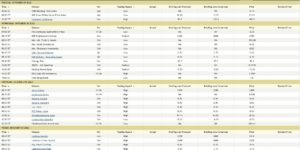 That’s a lot of what could be market-moving economic data scheduled to be released this week:

Whatever your market view or positioning, you’ll probably find data this week to fit your “story” so to speak. With nonfarm payroll data scheduled for Friday, you get ADP data on Wednesday too, and then jobless claims on Thursday morning, and these numbers can often give conflicting signals about the economy.

Just looking at Briefing.com’s 200k – 215k jobs estimate for Friday morning, that is well below what we’ve seen the last two years and it’s clear that the Fed has engineered a softer US economy and gradual glide path lower in terms of US GDP growth. However, without inflation data cooperating, and continuing to slide lower, the Fed risks a sharper recession. Although I find myself quoting them almost every week, Bespoke updated their “credit spread” information Wednesday night 11/23, and made the point that if the US sees a steeper recession, then high-yield credit spreads are probably too tight, but if the US manages to avoid a steeper recession, and the US economy skips like a rock off the 0% GDP growth range, then higher-yield credit spreads probably offer better value here.

Pick your poison. (One sharp-eyed reader noted that in fact high-yield ETF’s like the JNK and HYG did make new lows in late September, early October ’22, along with the SP 500 but high-yield did not fall as much as the SP 500 during that period below the June ’22 lows for the SP 500, but I do stand corrected and thank the reader for pointing that out after this update was posted last weekend.)

Rates-of-change improved across all periods:

Both sequentially and for the 4-week periods across the forward SP 500 EPS curve, the rate-of-change improved for forward EPS estimates.

The only aspect of this I don’t like is that for the rest of 2022 now, through year-end, we see far fewer earnings reports each week, which tells us the sell-side was far more pessimistic during the heart of the Q3 ’22 earnings season, and now with the majority of companies reported within the SP 500 (485 of 500) there is less downside pressure on earnings.

This coming week we will see Intuit (INTU), Salesforce (CRM) and Kroger (KR) reporting their latest quarter. It was one year ago that CRM started to come undone, which was quite surprising given it’s cloud base, but CRM now faces much easier comp’s over the next 12 months. One year ago CRM peaked at $311 or so per share, and was trading near $225 by year-end ’21.

Kroger also has implications for the stock and bond markets if the conference call gives us an update on food inflation. Food / grocery inflation is being particularly sticky as Walmart warned on it’s recent earnings call, but this will eventually be wrung out, as this recent blog post suggests.

This blog has updated this quarterly SP 500 EPS and revenue growth rate expectations for several years, but it hasn’t been shown in a while.

What caught my attention this week was the expected slowing in SP 500 EPS growth in mid-2023 and then the quick acceleration after that. Also, this blog is showing the expected growth rates for the first two quarters of 2024, but don’t put much import on those quite yet.

By the end of the 2nd quarter of 2023, the US economy will have seen 15 months of monetary policy constriction.

What’s interesting is that – if you look at the Refinitiv data “ex-Energy” – the SP 500 EPS growth starts to turn positive in Q1 ’23.

The point being the above EPS slowdown could be almost entirely energy driven. $50 crude oil anyone ?

Summary / conclusion: There is a lot of relevant economic data coming out this week, and plenty of it inflation-related. With the Friday, December 2, November jobs report will give us an update on both jobs created and average hourly earnings, with the average hourly earnings falling in the October jobs update, always a good sign.

It’s hard to say how all this impacts earnings: one Seeking Alpha reader told me that the Atlanta GDPNow reflects a 4.2% GDP growth rate for Q4 ’22. That’s very strong until you remember the Fed may not like that kind of growth rate, unless inflation continues to decline, but they may still stay tight until the US economy and SP 500 earnings do roll over.

Usually when inflation peaks, and rolls over, it continues to fall, but there is nothing to say something won’t intercede and keep it elevated. Treasury break-evens have been calling for 2.5% inflation for 5 – 6 months now, but that’s longer-term inflation and it’s only been recently that the inflation data has started to crack.

We will get the November CPI report a day before the next FOMC announcement in mid-December.

Bespoke noted in one of their updates this past week, that the odds of a 75 bp rate hike at the December ’22 meeting have fallen into the 20% probability range from a much higher level in the last few weeks.

Here’s two of my favorite charts this week from Bespoke: 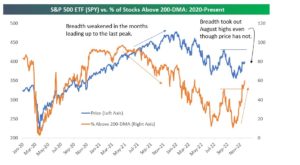