The thought looking at the softening economic data, is that the Fed and Jay Powell could be “behind the curve” again, initially with inflation on the way up in 2021, and now with the weakening economic data and the market-driven inflation signals, which seem to be plummeting. 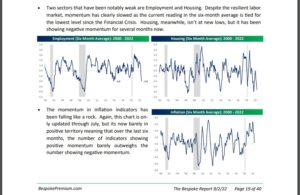 Bespoke published these graphs with the weekly Bespoke Report on Friday, September 2nd, after the market reversed it’s early gains and the SP 500 would up -3.3% on the week. The problem with all economic – with the possible exception of jobless claims – is that when it’s reported to investors by the various government agencies, it’s typically a month old.

Note that these graphs are “6-month averages” and while it was obvious that market-based inflation indicators were falling sharply, the labor and housing data deterioration was a surprise. It’s the “rate-of-change” too that’s interesting, which these graphs pick up.

Having told clients many times that the Fed is always late because it’s not their job to guess or change monetary policy in anticipation of what they think will happen, but to wait for the data, the short-end of the Treasury curve will tell us – probably before Powell does – when monetary policy is on the verge of shifting to neutral or accommodation.

Here’s a look at the Treasury yield curve since mid-June ’22:

Enlarge this data (my own) and you’ll see that the 3 month – 10-year Treasury spread has never gone negative or inverted this year, while the “2’s – 10’s” has inverted. It depends on who you ask, but it’s the “3-month T Bill yield vs the 10-year Treasury yield” that seems to be the more important of the two spreads, although I haven’t found a good reason why that is so, only that it seems to carry more importance than “2’s vs 10’s”. If the odds of a recession start to increase, the yield curve will likely flatten first and then steepen, and short rates will start to reflect a softening or relaxing of monetary policy.

We still seem to be a ways away from that happening. 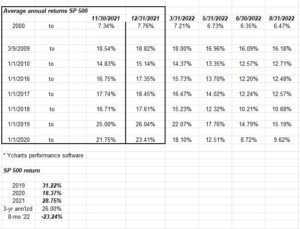 The original of this table was posted in mid-January ’22 here, so note what has happened to the shorter term returns since the end of 2021.

Returns are correcting in the right direction, but it’s likely more pressure is needed.

Looking at annual returns as of 8/31/22, this data is still bearish in the sense that a weak September ’22 would continue to pull down those elevated numbers.

To be blunt about it, my own opinion is that Jeremy Grantham and Michael Burry and all the “uber-bears” are still too early. A 9-year bull market is still young. Granted the returns were above-average, but that’s being worked off. It would be perfectly logical (to me anyway) to see small and mid-cap asset classes perform well, while the “mega-cap” tranche of the SP 500 goes nowhere. (This was covered in the style-box update in mid-August ’22.)

The CPI and PPI data for August are due out Tuesday, September 12th, and Wednesday September 13th, correcting an earlier post when the reporting days looked to be Monday and Tuesday. (Thanks to a reader who caught the error.) Readers have 5 more days of trading to await the next CPI data point, which is painful enough, after last Friday, September 2nd’s, stock market reversal. The blame for the reversal was thought to be laid at the feet of the Gazprom headline, which stated that the critical Nord Steam1 natural gas pipeline would remain closed thanks to an oil leak, and if you believe that statement I’ve got a Chicago bridge to sell you.

There isn’t much in the way of important economic data coming out this week – September 6th through 9th – but the Briefing.com table shows the detail on what’s expected next week.

Summary / conclusion: It’s expected to be a quiet week for both economic data and earnings. Kroger (KR), a Warren Buffett holding and Docusign, (DOCU), the software darling from 2020 and 2021 that traded up from $50 in mid-2019 to $300 by late 2021, only to come back down to earth beginning in late ’21, both report this week. Neither stock has ever been bought for clients. DOCU’s drop from $300 down to $55 has left it with a more reasonable valuation for the growth stock, but it’s not the kind of name that’s going to be rewarded even with good results and guidance, as long as Jay Powell has his boot on the neck of the market.

Given the Bespoke data, which was surprising (very first table above), the narrative could begin to shift to an economy slowing faster than was originally believed even as recently as two weeks ago.

Liz Truss’s ascension to the British Prime Minister’s position this weekend is interesting. The narrative around the UK and Europe is as negative as I’ve ever seen it. Some think the pound could break the buck. International (non-US) and emerging markets have been completely out of favor as investments since pre-2008.

Take everything you read here as one person’s opinion, and with substantial skepticism. It could all change tomorrow.