Dr. David Kelly of JP Morgan and his team do a great job of keeping their investors updated.

On Monday, June 27th’s weekly call with investors, David thought that the US economy slowed in June ’22, based on regional PMI’s that include both manufacturing services businesses. (Most retail investors don’t realize that the US economy has changed dramatically the last 50 years, and manufacturing is just a very small part of annual US GDP, most of the time less than 10%, versus the 50% – 55% of US GDP that manufacturing comprised after World War II, up until the 1970’s. That’s why it was important for David to add the “services businesses” aspect to his comments. The manufacturing PMI still gets a lot of press while the Services PMI typically gets far less, even though the Services PMI is a far more important indicator of US economic conditions than the manufacturing PMI.)

Judging by every other opinion, the US looks like it’s headed into a recession. Solid economists like Brian Wesbury and Ed Yardeni, haven’t really bought into the US recession as inevitable yet, and even David Kelly (I thought) hedged his forecast to expect positive GDP growth in the 2nd quarter of 2022.

@CNBC trots the talking heads out constantly, and like the never-ending “top” and “bottom” calls that get articulated constantly with little or no investment value attached to them, the recession forecast is now part of the daily discussion and the CNBC anchors never really get to the key question: how much of a US recession is discounted in current stock and bond market valuations ?

My two-second answer is “I don’t know, but certainly more than was discounted on December 31 ’21.”

Is this correction / bear market going to end up down 30%, 40% and maybe more importantly, with this last another 3 months or 6 months or even into 2023 ?

As someone who lived through the 1994 bond market when Greenspan raised rates 6 times, and he surprised everyone with the first move in early February ’94 (if memory serves correctly ) the whole year was very bleak until in the 2nd half of 1994, Mexico devalued the peso and then Orange County blew-up when it was discovered their Treasurer had made interest rate bets using zero-coupon Treasury bonds (again, I hope my memory is good on all that).

The point is two exogenous events and the rate hikes eventually changed Greenspan’s mind in early 1995, and he reversed course, being late as usual.

Reading this morning an economic update from Europe, specifically Germany, it said reported inflation data the past few days actually fell in Germany. Surprising given the whole “Russian natural gas and absence of nuclear power “narrative.

The attached table (click to enlarge) is Briefing.com’s estimates and consensus estimates for jobless claims data and the PCE data due out tomorrow morning, June 30 ’22.

The PCE consumption deflator is one of the Fed’s favorite inflation gauges. Personally, I care less about the headline data and am watching “core” more closely. Briefing’s +0.5% consensus forecast is still showing sequential gains so anything under +0.5% I would think would be a win for the inflation fighters.

Jobless claims have risen to 230,000 from March ’22’s low of 166,000 with the difference of 66,000 being a 38% jump in jobless claims since mid-March. An investment advisor friend from Cincinnati told me today he read that just an 11% increase in jobless claims is very closely correlated to a recession within a few quarters. 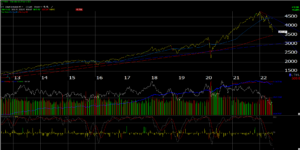 To answer the question again, the above SP 500 “weekly” chart shows the 200-week moving average hovering around 3,500 or 300 points lower from where the SP 500 is trading this afternoon.

Tomorrow’s PCE and jobless claims data is a big deal. We would probably all like to see an even slight improvement in the data sequentially to give the bond market, particularly the Treasury market something to cheer about, although Treasury breakevens are still moving lower and continuing to tell investors inflation is transitory.

Unlike the last 6 months, maybe at some point investors will be pleasantly surprised.

None of this is a prediction or forecast. Opinions like capital market conditions can change quickly. Do your own homework and make sure you understand your own risk appetite and stomach for volatility.