Although not a technical analyst by training, the two price levels being watched for the SP 500 are the May 20th low of 3,810 (support), which was that 1/3rd retracement level for the March ’20 through January ’22 record rally for the SP 500. That’s a Fibonacci level as given to me by the technician used by Trinity Asset Management Gary Morrow (@garysmorrow) who is a long-time acquaintance from our time on Jim Cramer’s TheStreet.com (old name) together in the early 2000’s. Gary can be found on LinkedIn and Twitter and is worth the follow if you are interested in technical analysis.

From the March ’22 lows, the SP 500 traded up to 4,637 on March 29th, accounting for an approximate 11.5% rally. With the FOMC announcement next week, one week from today on June 15th, expecting a 50 bp’s hike in the fed funds rate, it would seem like a logical time for the SP 500 to rally into the end of Q2 ’22, following next week’s announcement.

That’s how the short-term is being thought about in here for readers. This isn’t a prediction or a forecast, simply the short-term game plan through the end of June ’22. And it can change quickly.

Right now, the only way the Fed can seem to deviate from it’s current course if jobless claims start to rise (jobless claims actually bottomed in late March ’22) but they would seem to require a faster slope of degradation before impacting Fed / FOMC policy. With last week’s SP 500 earnings update, the expected +0.7% increase in the CPI expected Friday morning, June 10th, was noted, but I failed to mention or note that the previous print was +0.3% most of that due to lower gasoline. It sure seems like the bounce in gasoline in the month of May – Bespoke Investment Group noted May’s gasoline price increase was the third-largest since May ’05 – will keep Jay Powell and the FOMC on course.

Switching back to fundamentals, a little Walmart (WMT) has been bought for client accounts since their earnings disappointment. With the Target news yesterday, more WMT was added. A longer story is being prepared for this blog or for publication over on SeekingAlpha. It’s the first new Walmart buy for clients in years. There has been so many gross distortions to the US economy caused by Covid and then the policy responses, and then supply chain issues, for longer-term investors, or even if only for a trade, you can take advantage of these opportunities.

A reader asked about biotech and the XBI and IBB. It’s a trade I’ll only use technically or maybe putting it another way, only if the ETF’s look good from a technical analysis perspective. Trying to analyze small biotech companies from a fundamental perspective – in my opinion – consists of a lot of time with little insight returned. The balance sheets are typically a lot of intangibles with large cash positions for operations and the companies are often big bets on one drug and it’s either a big payoff or it’s a bust. Plus, I don’t have the kind of heathcare background to intelligently evaluate risk in the sector. As a traditional financial analyst by training, used to following EPS and revenue estimate revisions, and breaking down cash-flow, that kind of analysis is often worthless within small-cap or even larger-cap biotech. Like most of the analysis done, I usually stick with larger-cap names with sufficient cash-flow and investment-grade balance sheets in the healthcare sector. (Several years ago, I interviewed Driehaus Asset Management’s Michael Caldwell, who is one of the managers on Driehaus Life Sciences Fund and the podcast was entitled, “Counting Cards” which gives readers some insight into the fundamental process of small-cap biotech investing. ) 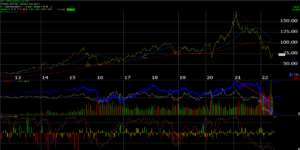 Here’s a weekly chart of the XBI which shows it dramatically oversold. Looking at the monthly XBI chart, the ETF is now more “oversold” than at any time since the ETF launched in 2007. (Monthly chart is not shown.)

Summary / conclusion:  Corrections and bear markets create value for longer-term investors. Readers have the shorter-term game plan in terms of trading the equity market and it wouldn’t likely be good for the equity market if the 10-year Treasury yield traded above it’s May 9, 2022, 3.16% high print, since you’d have to think the next target is the late 2018 high of 3.22% – 3.24%.

None of this is a prediction or recommendation to buy, sell or hold. Evaluate all commentary in light of your own portfolio and risk tolerance. Capital markets can change quickly, moving up and down rapidly. Anything written on this blog may not necessarily be updated, so define your own risk tolerance.