Leaving off last night with Part I on this coming week’s technology sector earnings, let’s finish up with two tech giants, Amazon and Apple and then maybe take a shot at two large-cap non-tech names:

No question growth expectations have slowed for Amazon, some due to above and the snake-through-the-bowling-ball that was 2021 and 2022 and ecommerce volume explosion, since “expected” revenue in 2022 at $539 billion is expected to grow 15%. Amazon has only had one year of “below 20%” revenue growth since the late 1990’s and that was 2014’s 19%.

Amazon is all about AWS as MSFT is all about Azure and the Intelligent Cloud segment: reading a sell-side report this week (believe it was Jefferies, working from memory), cloud migration is still thought to be early and w/ the cloud still less than total 30% of total IT spend, with the so-called Big 3 (AWS, Azure and Google) representing 2/3rd’s of the cloud infrastructure market.

There is a “return-to-normal” occurring in the ecommerce market, and ecommerce volume has actually started to slow a little, not a tough stretch given the “stay-at-home” trade in 2020 and 2021, but the question is does this represent a permanent return to bricks-and-mortar or is the slowdown something else ?

Here’s the “online” or ecommerce percentage of total retail sales: 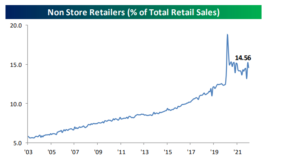 Readers can see the enormous acceleration the last 24 months, and now the slowing in growth rate as brick-and-mortar retail reopens. (The source for both of the above graphs is Bespoke’s retail sales analysis from the Retail Sales release in mid-March ’22. The date of the Bespoke report is March 16 ’22.) 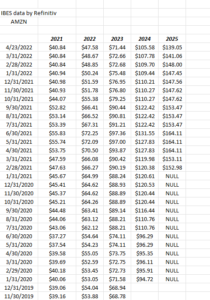 This table above show’s Amazon’s EPS estimate revisions, but the table was expanded to show what the 2022 EPS estimate was in 2019, and the fact is the current estimate for 2022 of $47.58 is below what was expected back when things were “normal”. 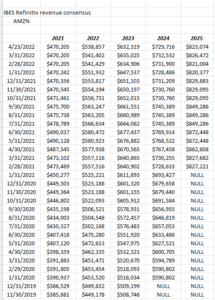 This table showing Amazon’s revenue revisions shows that the 2022 revenue estimates are above the 2019 levels but are still slowing from the ecommerce volume bulge.

Amazon has a margin issue as it it still expanding distribution and warehousing is likely facing the same issues with recruiting employees that every other business faces.

Looking at the above internal table from Trinity’s valuation spreadsheet, Amazon has been able to sustain gross margins over the pandemic years, but pressure is showing up in the operating margins which includes all the current expenses of the quarter.

The tough compares with 2021 and the tough job market are going to likely show up in Q1 and Q2 ’22 again. It will be interesting to see how revenue growth (and revenue revisions post the Q1 ’22 earnings report) fares for the ecommerce and AWS giant given it’s illustrious history.

While I’m very nervous about AMZN’s coming quarter, the 2nd half of 2022 should start to show some relief. As long as AWS reports its expected quarter and the problems in ecommerce don’t get materially worse, Amazon should eventually work through this.

The March and June quarters every year are typically Apple’s weakest after the seasonally-busy holiday or December quarter, which is Apple’s fiscal Q1. Consensus expectations for fiscal Q2 ’22 are (per IBES data) $1.43 on $93.9 billion in revenue while Briefing.com shows consensus at $1.43 in EPS in $94 billion in revenue which translates into a 4% decline EPS and a 5% y.y increase in revenue.

Last quarter the Mac was the big positive surprise and the iPhone continues to do well, with the 5G adoption continuing.

The stock has always been a stalwart. It’s total return the last 22 years has been astronomical and yet it religiously sports a 4% free-cash-flow yield. The dividend is rather paltry but is due for another increase from it’s quarterly rate of $0.22 per share or $0.88 annualized. Share repurchases the last 11 quarters have slid from 11% of Apple’s market cap to just 3% the last 4 quarters. 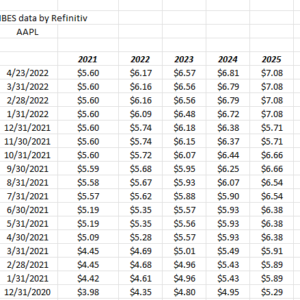 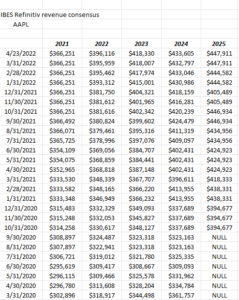 In short, looking at Apple’s EPS and revenue revisions for the 2022 and 2023, there are no flies on this beast. The positive revisions look as strong as Google’s as was noted in yesterday’s Part I of the tech preview, which is linked at the top of the page.

In March and June of ’21 Apple reported a 51% and 30% EPS beat respectively and a 16% and 5% revenue beat for the two quarters. Like most of the mega-cap tech giants, the compares versus last year are worth noting for readers and investors.

Given the steady revision increase, Apple’s quarter should be fine. That number progressions looks very steady so unless there is a major problem being hidden, Apple should be ok Thursday night.

Consensus for Wednesday morning is expecting $16.1 billion in revenue generating a loss of $0.25 per share. The manufacturing giant has to stop surprising the Street dramatically negatively. A string of smaller misses might even be welcomed at this point.

All the EPS and revenue estimate revisions are negative, which should surprise no one. Is it a busted brand ? Possibly, but I don’t think that the US mass market will suddenly boycott Boeing’s jets, but the FAA seems intent on watching the aircraft manufacturing giant like a hawk, which means more government regulation and more expenses to support that regulatory oversight.

Clients owned it for a while, the stock was sold at $179 a few months back, and I continue to watch it for some basing action on the charts and the unlikely event that EPS and revenue estimates start to stabilize.

The key aspect to the stock is technical today since a higher-volume trade above $86 – $87 for Merck would be a 20-year breakout on the stock, above the December, 2000 – January ’01 former highs.

Merck has been added to client accounts slowly over the past few years, but more will be bought if a solid technical breakout occurs.

Keytruda and Gardisil are the key Merck drugs and Keytruda, which Morningstar expects to be a $25 bl drug, is the more important of the two.

Free-cash-flow is healthy, with Merck sporting a 4% FCF yield and the drug giant hasn’t bought back that much stock in the last 8 quarters. Plus, MRK has a 3.25% dividend yield as of this writing.

Both Merck and Pfizer are emerging from 20-year consolidations although covid and WarpSpeed have complicated the landscape. If you’re nervous over large-cap growth (and you should be after it’s run from 2015 to 2021), don’t forget these GARP stocks with reasonable valuations. They’re boring and mostly ignored which isn’t a bad place to start looking for valuation opportunity.

Conclusion / summary:  The above analysis represents my approach to the key earnings reports this week, but past performance is no guarantee of future results, and after living through 2000 to 2002 bear market, many analysts only change numbers after the fact, like we saw with Netflix last week. (Fortunately, clients had no positions in NFLX.) Take everything above with substantial skepticism since the capital markets change so quickly.

As the old saying goes “be careful out there”. Stocks are reacting to an aggressive, posturing, Fed and Jay Powell, and as we saw with Tesla not necessarily to good, solid company fundamentals.

Patience wins out in the end.