Leading off articles with a question sets the readers up for an expected answer which involves a prediction for the future.

The fact is no one knows what will happen, and all clients can ask of advisors is that an advisor make probabilistic decisions regarding portfolio construction and asset allocation, that allows the client portfolio to participate in secular bull markets but also preserves capital in secular bear markets.

The period from 2000 to 2009 was a unprecedented decade for US stock returns. Before Morningstar was swallowed up Ibbotson, I always studiously analyzed the annual Ibbotson return data from “Stocks, Bonds, Bills & Inflation”. Ibbotson – when calculating the “average, annual return” for the decade from 2000 to 2009 – concluded that the SP returned approximately 1.25% ( I can’t remember the exact figure) per year for the decade, with the benchmark basically earning the dividend for the decade. Looking at the historical decades beginning with the 1930’s, the decade from 2000 to 2009 was the worst average, annual, return for the SP 500 since the 1930’s, although the 1930’s was far more negative. In other words, the SP 500’s decade return was the worst since the 1930’s, albeit positive.

Two weeks into the 2022, the bond market returns are almost universally negative (here’s the blog post from this weekend showing the Treasury yield curve and the bond funds tracked weekly), with rising Treasury yields, which preceded the October ’87 stock market crash and 2001 – 2002. In the spring of ’87, the 30-year Treasury bond lost 9 points in a month, and investors often forget that Alan Greenspan raised rates in 1999, which contributed to the 80% 2000 – 2002 Nasdaq bear market, although if you’d ask me about “attribution” for the 2000 – 2002 50% bear market in the SP 500, I’d say it was primarily the collapse of the tech and large-cap growth bubble, which also included 50% declines in stalwart names like Home Depot and Walmart.

Alpine Macro, which is a macro research firm that ( I think) does good work out of Canada, sent this missive along this weekend, which properly sums up what a lot of buy-side investors are thinking right now.

In July, 2020, this blog post was written again posing the question, “Planning for a March, 2000, Moment” (the Nasdaq and SP 500 both peaked in March, 2000) just so readers and investors remain conscious of history and it’s important lessons.

Writing for Jim Cramer’s TheStreet,com at the time kept me sane. There was another kid who wrote for the site at the time, Jeff Bagley, who was very sharp, went to Fordham b-school, made very good calls, good writer, good analyst, etc. who shot me an AOL instant message at the time, saying, ” I come into the office and just lay my head on the desk and hope this goes away.”

What made the bear market tougher to stomach was the actual “real economy” i.e. home and auto sales and general business activity was white hot, thanks to the Fed having to cut rates after 9/11 and really injecting a lot of liquidity into the US financial system.

Summary / conclusion: Per the Bespoke Report published every Friday afternoon, sentiment has reached a low (depending on the survey) with AAII not being this bearish since mid-September ’21, while some of the other surveys are now as bearish as they’ve been in the last month. Readers probably only care about how bad any correction will be, and the fact is nobody knows.

This blog post that was written in early December ’21 for a client dinner where I had to explain that many of the winners of their portfolios for the last 6 years were going to have be trimmed, and this graph / table was shown to the clients to try and crystallize to them how good the recent returns have been over the past 5 years and maybe some capital gain harvesting was warranted. This following table updates the “average, annual, returns” as of 12/31/21: 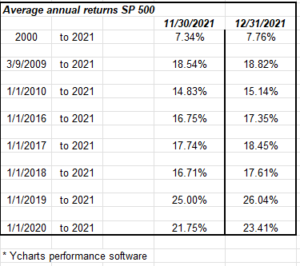 Put simply, there returns cannot last, and like the growth stocks in 2000 – 2002, the underlying companies might be fine, might continue to grow at the same rates they have the last few years, but if the “macro” changes, and right now that’s the Fed, then PE’s can compress and popular companies can find a lot of air underneath their stocks quickly. And the fact is, for the Russell 1000 growth stocks, that’s already happened. The Top 10 stocks in the SP 500 continue to hold, but you have to wonder how long that lasts.

Clients are seeing their value positions increased in weighting, along with international (Oakmark International) and the Emerging Markets ex-China ETF (EMXC). The UK looks like it is poised to break out. One client owns the EWU and the FXB together. If the EWU can power through $35 on volume, which is the 200-month moving average on the monthly chart, that would be a big plus. Gold has been churning for a while in this $160 – $180 area. Gold’s (GLD) 10-year return on 12/31/21 was +1.18% per year; contrast that with the above table and the SP 500’s return since 1/1/2010. Josh Brown, the noted CNBC commentator who is featured prominently on the network, noted in the last 18 months that the average, annual return of the EEM since June 30, 2006 is 5%, versus the SP 500’s 11%, or less than half the average return over the last 15 years.

Over on Seeking Alpha, where I occasionally do my company analysis and bottom-up research, a series of articles have been run over the last 5 years called “Surveilling the Laggards” where articles are written for companies and stocks, like Coca-Cola (KO) which last made a meaningful all-time-high in July, 1998, around $48 per share and has risen just $12 in the ensuing 13 years. IBM, peaked in 2013 at $215 – $217 per share and has lagged badly since. Bank of America hasn’t yet traded up to its December, 2006 peak price of $55 per share.

Cisco, Intel, are two other tech giants that have spent the last 21 years trying to reformulate their business models to capture the late 1990’s growth, with little success. Cisco is probably a better bet than Intel, although Intel’s new CEO might work some magic. Intel’s Achilles heel is its $10 billion capex nut every year, and I don’t know that that is going to be diminished anytime soon. Intel’s capex consumes 50% of its cash-from operations, making it more akin to a 1960’s steel mill than a cutting-edge technology company.

The old large-cap pharmaceutical complex like Pfizer, Merck, Eli-Lilly are reinvigorated with the Covid-19 outbreak. Pfizer has broken out of a 20-year malaise when it traded above $48 on it’s widening efficacy of the Covid vaccine. More PFE is being bought on pullbacks.

Personally I don’t think investors will see a 50% peak-to-trough correction in the SP 500 like we did in 2000 to 2002, simply because I don’t think the probability of seeing the add-on events that followed like 9/11 and two major companies going into bankruptcy thanks to massive fraud is very likely today. But I could be wrong. I do think there is a good chance we see a 20% – 25% correction in calendar, 2022, at least partially based on interest rates and the always-inevitable adjustment period following a policy shock like March ’20.

Take all this with substantial skepticism and past performance doesn’t guarantee future results. The above positions can change quickly too and this blog isn’t always updated.

The key word the next year or two is “uncorrelated”.  The only constant in the capital markets is change, and the longer the trend the stronger the likelihood that it will change at some point

Thanks for reading. The thoughtful comments are always appreciated.