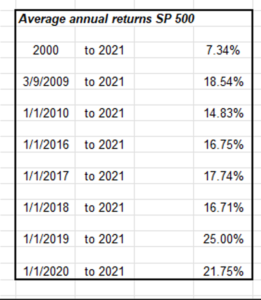 This post was probably the best blog post on this blog this past year. All returns are as of 11/30/21.

The title could have been better but readers / investors get the point. (The returns will be updated as of 12/31/21.)

If that doesn’t worry every reader looking at the post, in terms of expectations of “future stock market returns” I’m not sure what would.

Most of the banks that have waded in with 2022 stock market forecasts have actually been pretty positive, more upbeat than I would have thought. The Fed and Jay Powell scared the lights out of investors in both November and December ’21 with his tapering comments and the expected rate increases that are now being built into forecasts in 2022 and yet this last week of the year, the SP 500 traded to all-time-highs on good breadth.

After the 50% correction in the SP 500 from March, 2000 through October, 2002, the SP 500 bottomed starting with the tanks rolling into Iraq and the beginning of Gulf War II in March, 2003, but what was puzzling for the next few years is that the Treasury yield curve never steepened very much and for any length of time, even when Greenspan started raising rates in 2004, 2005, 2006, etc. Greenspan himself referred to this as “the conundrum” and I wonder even today if the lack of a meaningful rise in the 10-year and 30-year Treasury yields is foreshadowing something ominous, particularly since CPI and PPI inflation are north of 6% and the 10-year Treasury yield is still 1.50%.

Post the 2001 – 2002 equity bear market, Rick Santelli, CNBC’s iconic bond market and CME reporter would give his bond market sentiment updates on Tuesday / Wednesday morning from the bond pits at the Chicago Merc and Chicago Board of Trade back then, with bearish sentiment often being north of 80% – 90%, and yet the longer end of the curve just wouldn’t decline (in price).

The lack of increase in Treasury yields relative to inflation is the biggest disconnect I saw this year. Granted, the Fed’s favorite inflation indicator is the PCE implicit price deflator, and that indicator (ex food & energy) is closer to 3.5% y/y increase in the last few months, but that still means “real” interest rates are negative to the tune of 200 basis points.

The Treasury yield curve over the past year has clearly not been worried about inflation.

Clients bond positions fared pretty well in 2021, with the two Nuveen muni high yield funds returning 9% – 10%, which was not that big of a stretch expecting higher taxes with a Democratic Congress and Presidency. However the tax hikes never really materialized but the Congressional stimulus saw cities and states like Chicago and Illinois upgraded from Baa3 to Baa2 thanks to the government handout. The Washington largesse no doubt helped keep a bid under high-yield muni’s this past year. Corporate high yield fared well too, returning over 5%. Clients were long the SHYG all year in various weights.

The two largest positions – the Blackrock Strategic Income Opportunity Fund (Basix) and the JP Morgan Income Fund (JMSIX) both beat the Barclay’s Aggregate. I was disappointed with Blackrock and their wholesalers: Rick Rieder’s monthly bond call is always first-rate and chock full of good info, and I always had to hunt around to find the call detail. The Blackrock wholesalers that were assigned as points of contact, just never responded. JP Morgan was just the opposite: their wholesaling team was very service-oriented and looking to take care of advisors. The JP Morgan Income Fund returned over 3% in 2021, while the Blackrock SIO fund rose 55 bp’s on the year.

Money market funds will benefit from the accelerated taper and rising short-term rates but holding more cash within the bond allocations will occur gradually over the first quarter of the year.

If the taper and rate increases materialize as Powell has intimated, and if the yield curve does steepen, good ol’ simple money market funds might hold a good chunk of client bond money this year.

Technology and growth stocks have been trimmed and client accounts are being positioned more defensively with Health Care, Financials and Consumer Staples seeing their weights lifted. What many investors don’t realize about higher PE growth stocks is that the fundamentals of the business can remain intact and unchanged, but the stocks can decline on “PE compression” i.e. higher interest rates, Ukraine and Russian tensions, China and Taiwan tensions, currency issues, etc.

Summary / conclusion: None of this is advice or recommendations. It’s just a blueprint for what may come in 2022. Frankly, one way to describe an early look at 2022 right now, might be to say “It’s all about the Fed and interest rates” and leave it at that.

Thanks to readers for all of their kind (and not so kind) comments over the past year. I’ve enjoyed the dialogue with thoughtful and more detached readers on Seeking Alpha.

Take everything here with a lot of skepticism and know that “past performance is no guarantee of future results”.

Everything can change quickly in the capital markets.