On Tuesday, September 14th, 2021, Apple will feature the iPhone 13, as well as an upgrade to the Apple Watch and Air Pods.

What an amazing story this company has turned out to be, considering that it traded for $0.25 (split-adjusted) per share near the Long-Term Capital lows in October ’98. 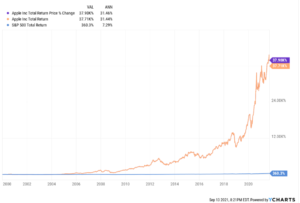 The outperformance of Apple versus the SP 500 since the start of this century has been roughly 24% (2400 basis points) per year !

(Caveat: YCharts is a great service, but as someone who has started to focus on “average, annual” returns and returns for certain asset classes over long periods of time, I recently discovered that Ycharts does NOT have either Nasdaq Composite or Nasdaq 100 data going back to the 1990’s. The Nasdaq Composite data starts in 2000, but the Nasdaq 100 data doesn’t begin until 2010 which makes drawing comparisons between the 1990’s and the current market environment more difficult. When I inquired of YCharts if the data was available, or would be available, the answer involved data vendors, etc. etc. and the final answer was “not really”. (The only reason this is brought up is that Apple was and is traded on the Nasdaq, so the immediate thought was, “Is the 1990 decade and 2000 to 2009 return data on Apple accurate ? “)

As an investment community when we review the late 1980’s and 1990’s, the large-cap tech stars of that era, all flamed out in shorter time spans than Apple has proverbially “shot the lights out”.  Microsoft came public in 1986 and hit it’s all-time high in 2000, and then traded in a 16-year bear market, never making an all-time-high. Cisco and Intel, both hardware companies have yet to trade above their 2000 highs, with Cisco coming public and the stock price peaking within 10 years, 1990 – 2000. The “peak” market caps for Microsoft, Intel, Cisco, General Electric during 2000 were all around $500 – $600 billion max. Today Apple and Microsoft are $2.5 and $2.2 trillion in market cap respectively, and dwarf the 1990’s giants.

Apple has outlasted them all, possibly because – as Jeff Matthews, a hedge-fund manager and a contributor to TheStreet.com in the late 1990’s early 2000’s pointed out –  the 1990’s was the build-out of corporate technology or the backbone of corporate technology, with PC’s servers and networks, while the 2000’s or the start of the 21st Century was all about consumer technology and personal productivity. 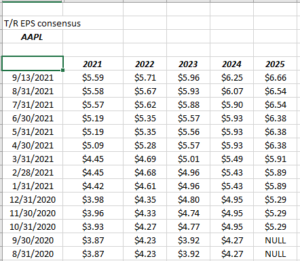 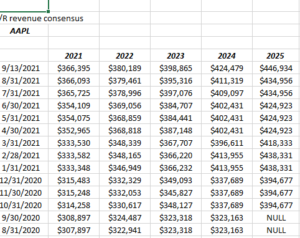 To add a little kicker for readers, here’s the percentage increase for each of Apple’s fiscal year EPS estimates since 8/31/20:

Here’s the same percentage increase in Apple’s revenue estimate from 8/31/20 through today:

Summary / conclusion: A big chunk of Apple was sold for clients in 2018 (and i’m sure I’ll get some verbal abuse for that), during the China trade war started by President Trump, but part of the sale was hedged by owning the QQQ, of which Apple is the largest market-cap weight. From a portfolio construction standpoint, Microsoft has been clients largest position since 2014, and what few retail investors know is that since 1/1/2013 through tonight’s close, Microsoft has outperformed Apple by about 600 bp’s per year during that time frame.

The original question remains: when does the growth stop for Apple and maybe – more importantly – why ? Tim Cook seems to have managed China very well. and American products – despite the political rancor – seem to remain in high demand over in China. The Americas and Europe were 67% of total Apple revenue in Q3 ’21, with China, Japan and the rest of Asia-Pacific making up the difference, but China matters in terms of longer-term growth.

One final thought: in the late 1980’s Motley Fool wrote a piece on Coca-Cola’s growth in the 1980’s and 1990’s and noted that if it continued at the pace that it was happening, (I thought) the conclusion was Coke would be bigger than the SP 500. Coca-Cola peaked in 1998 just prior to the Long-Term Capital Crisis and only made a new, convincing all-time-high in the last few years, and even the breakout has been rather “punk” under James Quincey.

Maybe the growth stops when every person on the planet owns an Apple product. It might not be the stretch that we think.

This is not a recommendation of any kind. More of a perspective piece.

2 thoughts on “Apple’s New Product Event: When Does the Growth Stop?”