This article has been a long-time coming, and will discuss the shortcomings of managing your stock market risk based strictly on SP 500 earnings estimates.

My late, great, friend, Jeff Miller, who left us in May, 2021, used to talk to me all the time about the correlation between SP 500 earnings estimates and the SP 500 itself. Jeff would show me charts and graphs and was actually the inspiration behind the start of this blog, since he knew that I followed SP 500 earnings data, although it was initially more from a sector perspective than the overall index itself. Jeff and I used to contribute to Jim Cramer’s “TheStreet” back in the early 2000’s and he would see my posts on sector earnings for the SP 500, and we started to dialogue from that original topic.

The point being that there is a relationship or correlation between SP 500 earnings and the SP 500 itself, but I suspect it’s more coincident than leading.

If readers are perusing this blog every week looking for a “sell everything” call on the stock market, you’re going to be sorely disappointed.

Here’s why tracking SP 500 EPS data is not a perfect (or even almost perfect) market-ting tool:

Readers have to look only at the first decade of the 21st Century, from 2000 to 2009, to realize that “P/E compression” is the hallmark of a secular bear market. 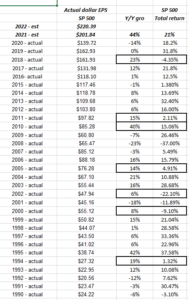 This table shows the last 30 years SP 500 EPS growth (y.y) accompanied by the total return for the benchmark for that respective year. In the decade of the 1990’s when the “average, annual” return for the SP 500 was 18.19% per year, in 1994 SP 500 earnings grew 19% while the SP 500 returned 1% thanks to the 6 fed funds rate increases by Alan Greenspan. That was the one year of PE compression for the entire decade.

The 2000 to 2009 decade saw two 50% corrections in the SP 500 for two entirely different reasons. It was an ugly period and despite the fact that SP 500 EPS grew cumulatively 20% for the decade, the SP 500’s cumulative return fell short of that mark.

Tracking SP 500 estimates only really would give you a market-timing signal when we would have a “traditional” business-cycle recession, like we did in 2018. After the SP 500 fell 18.9% in Q4 ’18, after Jay Powell raised the fed funds rate to 2.25% – 2.50% in December ’18 and then promptly had to reverse course with monetary policy. The “forward estimate” SP 500 EPS estimate peaked in late September ’18 and then started to roll over, but that’s not unusual. The “normal” pattern pre Covid-19, is that the “forward 4-quarter” SP 500 estimate peaks early in each quarter and then gradually declines.

Exogenous shocks are shocks to the US economy, like 9/11 and then Covid-19 and the pandemic. These are events that exert significant influence on the US economy, but are not precipitated by natural business cycle events.

LizAnn Sonders of Charles Schwab and Bob Doll who was at Nuveen at the time, were quick to turn cautious as we entered Q4 ’18.

The point being is that sometimes the SP 500 EPS data gives a false signal. Much like the old saying about the Leading Economic Index indicator and it’s forecasting 9 of the last 3 recessions, the SP 500 EPS data can look grim for some time periods and then the estimates ultimately get revised higher.

Covered in part by “PE compression” which is a result of the market-cap weighted influence of the SP 500 index, but to put a finer point on it, as we saw from 2000 to 2002 in the SP 500, the collapse in technology, and really large-cap growth like Walmart (WMT) and Home Depot (HD) as well, exerted a significant influence on the SP 500 while the vast majority of the stocks within the SP 500 weren’t impacted.

Summary / conclusion: The top 10 positions in the SP 500 by market cap are only 9 companies since the benchmark holds both the Class A and Class C shares of Alphabet (GOOGL).

Occasionally I think about “what if” the top 10 companies in the SP 500 suddenly had their EPS reduced by 50% – consider the damage to the benchmark in terms of total return that we’d see and yet the vast majority would likely be ok, depending on what caused the 50% decline in those respective earnings results. That would be a situation that would be similar to 2000 through 2002, where the SP 500 corrected 50% from it’s March, 2000 high to it’s October, 2002 low.

During that time we also saw the contested Presidential election of 2000, 9/11, and the Enron and Worldcom frauds.

Pretty much everything that could go wrong with the market, did go wrong.

The goal of this article is to caution regular readers that the US stock market is a discounting mechanism and very often changes direction well before fundamentals change. The same is true with individual stocks. My most memorable cautionary tale for readers is Cisco Systems (CSCO) in late 2000, 6 weeks after Intel warned, when Cisco reported in early November, 2000. John Chambers raised their February ’01 quarterly guidance and said business remained healthy. Cisco’s stocked had peaked at $82 in April, 2000, and was trading around $55 per share at the time of the November ’00 earnings report. It rallied smartly for a week or two after Chambers guided higher, then turned lower and kept going. By early February ’01, Chambers then lowered their 2001 guidance and the stock fell all the way to $11 per share in October, 2001. Cisco’s stock lost 86% of it’s market value in 19 months.

The Fed and the macroeconomic landscape look supportive for the next 3 – 6 months, and so does the SP 500 3rd and 4th quarter, ’21 earnings and revenue data, but know that the world can change quickly.

Writing about topics like this helps flush out my own thinking on topics such as tracking SP 500 EPS estimates. Hopefully readers found it somewhat helpful.

As a contributor to Seeking Alpha’s website (www.seekingalpha.com) where I write more about a number of companies and their stocks, I’ve found that EPS and revenue revisions for individual companies can be reliable indictors of stock price direction, versus the index itself.

Know that there is no perfect market-timing signal.

Readers should get the point by now. It’s always an imperfect process.

Take everything you read on financial media with skepticism.