If you study the 50-year history of gold (and granted, that has been easier with the GLD ETF that started trading in 2005), gold has been the perfect stock market hedge with gold’s best decades in the 1970’s and then again from 2000 to 2009. 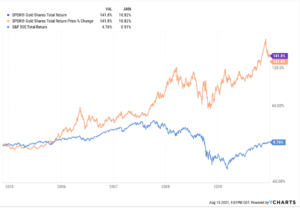 The point being that with the 10-year return on gold finally going negative after peaking in 2011, it could also mean that the secular bull stock market is starting to age as well.

The new fly in the ointment however is bitcoin and crypto and it’s influence on the metal.

After all, Bitcoin is referred to as “digital gold” among other things.

Summary / conclusion: For client portfolio construction, one characteristic I’ve been seeking for new portfolio buys is long-term laggards, with good valuations, that have the prospect of outperforming relatively and absolutely when the secular bull market in stocks finally ends.  (Here’s a good example: this weekend’s Seeking Alpha article on Pfizer and Merck.) When March 2000, hit and the tech, financial, large-cap growth frenzy finally ended, what did well in the ensuing 6 – 7 years was everything that didn’t do well in the 90’s, i.e. small-cap, international, emerging markets, value stocks, commodities, and GOLD, etc.

The 90’s was a “binary” decade for stock investors: either you did great or you lagged badly.

The 2000’s taught a lot of painful lessons, one main being that portfolio construction is like threading a needle, i.e portfolio managers have to own winners, in big enough weights to make a difference in client accounts, but beneath these winners has to be other stocks, sectors, asset classes that protect against rotation.

Gold may not have meaningful upside for a few more years: it depends on how far along you think we are in the secular bull equity market, and owning gold assumes or presumes it will act just like it did in late 1999, early 2000, as the 1980’s – 1990’s bull market ended and that may not happen.

Keep gold – the GLD – on your radar screen. No doubt I’ll get arguments, but I don’t think gold has anything to do with inflation, or the dollar (although some short-term correlation exists between the dollar and gold), or deficits, or the moon being in the 7th house.