Suddenly all the prognosticators are bullish. 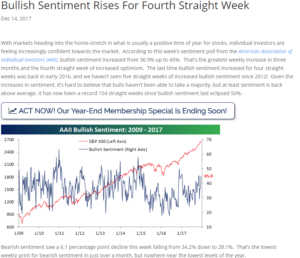 Here is the data:

Analysis / conclusion: Just thinking out loud about 2018 and the one thing that jumped out this past weekend, is that we haven’t seen a year of P.E contraction since 2011. (Look at the table, and compare earnings growth vs SP 500 return for 2010 and 2011.)

That is a stretch of 7 years.

1993 was the final year of the RTC corporation and the bank bailout after the commercial mortgage and real estate crisis of the late 1980’s and early 1990’s.

1994 was the 6 rate increases by Greenspan which shut down the market even though SP 500 earnings grew 20%.

What shocks me is that in 1995, for those who remember the 36% return on the SP 500, and the start of the Tech and large-cap growth phase – SP 500 earnings grew a whopping 40% that year. (I did not know that until looking closely at the data tonight.)

Just navel-gazing before this weekend.

Usually P.E contraction occurs when, the Fed’s active (however 1994 was a huge surprise for the market – Greenspan shocked everybody that year), or some other “extreme” aspect to the capital markets happens.

We only know when something is a surprise when it happens.