What’s somewhat surprising this year, is the dearth of articles on the difficulty in diversifying client portfolios in 2022.

Bonds went south in 2022 and by that I mean all asset classes were negative, and investors received little benefit from international or non-US allocations (including emerging markets) particularly after Ukraine and the China lockdowns, and the 20-year strength in the US dollar. As of June 30, according the Bloomberg data, Emerging Market credits were the worst performing bond asset class YTD, returning -17.14%.

In 2021, all of client’s Vanguard Emerging Markets ETF (ticker – VWO) was sold, after the Jack Ma fiasco and his going into self-imposed exile, and after China cracked down on the tutoring IPO’s, but also China has been slowly strangling Hong Kong from a human rights perspective, as evidenced by the jailing of the editor of the Apple Daily, a “pro-democracy” newspaper, for national security violations. Half of VWO’s top 10 positions were the major Chinese companies, like BABA, TenCent and others, and that wasn’t going to work. The EMXC was bought (Emerging Markets ex-China ETF) and clients continue to hold that ETF instead of any Chinese exposure.

The other part of clients non-US exposure was owning the Oakmark International Fund (OAKIX), which is managed by David Herro. He’s a great manager and his historical track record is quite envious. However he got caught up in the Swiss and European banks, which could have made sense after the Brexit mess and the China slowdown in the latter half of last decade, but Credit Suisse and a few others became roach motels with a series of unending disclosures and issues that had to have driven David crazy. The Russian invasion of Ukraine was not kind to European-based funds like Oakmark International, although OAKIX managed to beat the SP 500’s return YTD in ’22 by 54 bp’s, returning -19.44%. It’s still a top 10 position and none of the fund’s allocation has been sold.

The US dollar peaked two weeks ago Thursday and has begun to gradually decline.

This clip of a much bigger spreadsheet shows the YTD performance of the UUP (dollar bull ETF), Oakmark International and the EMXC ETF.

This chart says it all: 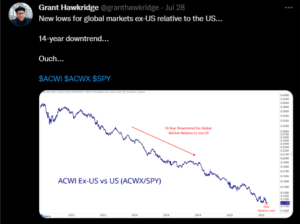 Don’t know this gentleman who posted this on Twitter, but his other technical work is quite good. I think he’s affiliated with @JCParents, another excellent technician.

Something will break this downtrend.

The dollar rose sharply from June 30 to mid July ’22 but has started to decline in the last two weeks.

A weaker dollar over the next few months is probably an underestimated event should it happen, and I do think it would be bullish for not just US stocks, but international assets.

What’s interesting is that if you look over the last 20 years, particularly back to the early 2000’s, when tech peaked in March, 2000, the emerging markets took off as did commodities, but the difference back then was China was growing 15% a year, and did so from the late 1990’s through 2010. Today, even with the commodity boom of the last year, the commodity surge hasn’t been driven by China. My own thinking – whether right or wrong – is that probably makes the commodity bull market less robust.

A still-appealing aspect to emerging markets, non-US and Oakmark International, is that if you look at “annualized returns” for 5, 10, and 15-year time frames, the annual returns are well below the SP 500 and large-cap growth annualized returns for the same period.

Something will catalyze international, non-US and EM asset classes, but there has been little portfolio diversification benefit from owning non-US.  Hopefully it’s a weaker dollar over the next 6 months. Annualized returns will be updated in another longer article.

Ed Yardeni is always a great read. Here’s an interesting snippet from his July 26 ’22 Morning Briefing: 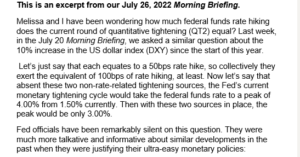 This isn’t often considered by investors. It may be why commodity inflation and the economic data seems to be slowing faster than originally expected.

Reasons to be bullish: In the SP 500 earnings update posted Friday night, July 29th, I was probably too cautious on the US stock market’s outlook into year-end, but the first 6 months of 2022 was a barrage of bad news, some expected like the Fed and Jay Powell warnings us in late ’21 what was coming, but Ukraine was a pretty big shock to the system, and it could get worse.

That being said, the improving credit spreads in both high yield and high-grade is a definite plus. Don’t underestimate the importance of a strong credit market. It’s tough to rationalize a deep recession when high yield spreads are improving.

Not mention in last night’s post was the following two slides from Bespoke’s latest missive: 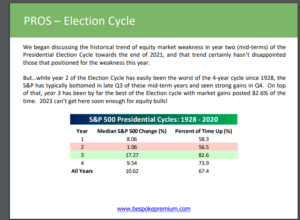 Ryan Detrick talked about the election cycle earlier in ’22 and now it will play a bigger role in the back half of the year. 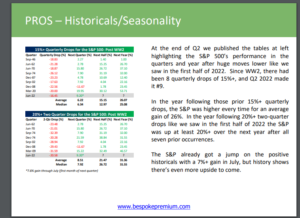 This historical analysis by Bespoke portends well for 2023.

Finally, there has been a lot of talk about “breadth thrusts” the last week. The SP 500 rally got a lot of people’s attention.

Summary / conclusion: The eternal debate between the new bull market and the still, same old bear market will go on for months now. To use quote that’s been used many times on this blog, “As the good country lawyer once said, I can argue it either way”.

June ’22 could have been the bottom for the SP 500, for a considerable time period.

Don’t predict though. Invest prudently, with a longer time-frame in mind. A LOT of stocks and bonds and ETF’s have come down in price the last 6 months.