If someone has already offered up the analogy, my apologies, but 2022 is looking a little like 2018 at least from the equity side of the equation. In 2018, January ’18 saw a sharp run-up in the stock market, which is many ways resembled the late 1990’s frenzied action, and then on or about January 31 ’18 the SP 500 peaked and didn’t really bottom until early April. There was a tremendous spike in the VIX resulting in the collapse of one alts fund (here in Chicago) and it definitely put some fear and anxiety back in the stock market. The sharp equity drop was 5 quarters into the Fed and Janet Yellen raising the fed funds rate. With the April ’18 bottom, the SP 500 didn’t peak again until the last week of September ’18, when that brutal 4th quarter correction started, ultimately accounting for an approximate 20% peak-to-trough correction in the SP 500.

The point is that the Feb – March ’18 correction was the first warning sign or tremor that culminated in the Q4 ’18 correction. Are we seeing some of this again ?

Re-visiting the SP 500 peak in late September ’19, the SP 500 started to roll over from a “sequential rate of change” perspective which means that after Yellen’s almost 2 years of tightening or raising fed funds, investors saw a typical “earnings slowdown” correction.

One of the reasons this spreadsheet was created post-2018 was to track that rate-of-change data and here’s what the data shows as of 3/25/22: 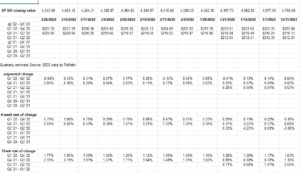 There is no yellow flashing light yet. Just three weeks out of the 11 so far in Q1 ’22, saw a sequential decline in the forward earnings data.

Q1 ’22 earnings will be enlightening for sure. 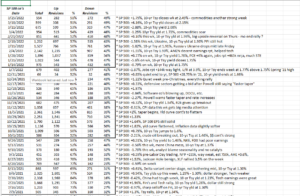 This table (data from IBES data by Refinitiv) is another home-grown spreadsheet and shows the last 3 quarters of SP 500 and the number of “up revisions” versus the number of “down revisions”.

Readers can see the Q4 ’21 earnings results while still showing positive revisions are less “robust” than Q2 ’21 and Q3 ’21 earnings season. (Start at the bottom of the “up revisions” column and work your way higher.) This is one reason we pay attention to both the absolute dollar EPS and the revisions. Are analysts getting more tentative or is there a problem with forward earnings ? Year-over-year growth rates will be lower in 2022 which has been known for a while, but with less upside in stocks, I also think analysts are probably hesitant to be aggressive with positive revisions to forward numbers.

Remember analysts are people too.

Summary / conclusion:  The jump in the 10-year Treasury yield got my attention this week, while the steady decline in positive revisions for the SP 500 in the last 6 months was surprising as well. With revision data, the last month of the quarter is typically slower since analyst models are set from the first two months of the quarter, but it does appear “the Street”, as we call the sell-side brethren, is turning more cautious.

My own opinion is that we have a sharper correction ahead for the SP 500, but whether that’s this week or the next quarter or by year-end is unknown.

Take any opinions as just that – an opinion – and know that capital markets can change quickly.