With Q4 ’21 earnings poised to start this week with the big bank numbers, let’s have a quick look at the numbers and the EPS / revenue revisions:

Per the IBES by Refinitiv data, here’s the trend in 2022 expected EPS growth rates by sector. Look at the financial sector first, it has gradually gone “less negative” in the last 90 days, as reserve releases, which sharply boosted EPS in 2021 are expected to fade in 2022, but that drag on EPS will likely grow less negative, given the state of the US economy (corporate loans) and capital market activity. Investment banking and trading activity will likely be a little lower in 2022 if the Fed is as aggressive as they seem to be posturing to start 2022.

JP Morgan, Citigroup and Wells Fargo are expecting lower y.y EPS in 2022 vs 2021 as it stands today. However as you’ll see from the EPS and revenue revisions, the revisions remain mostly positive.

Banks are typically valued off the “pre-tax, pre-provision” (loan loss provisions) metric, which means EPS and net income have been particularly muddied the last 8 quarters. In addition, the stay on bank repurchase and dividends (capital return) has ended, which is a plus for readers and investors.

Finally, even Bespoke’s Weekly Report was titled, “FinEnergy” which spotlighted the two best performing sectors – Financials and Energy – of the first week of 2022. The blank assumption is that higher interest rates will help the financial sector across the board, but don’t throw away the seeming correlation between the energy sector and the financial sector.

To give readers some longer-term perspective, for full-year 2021 and 2022, consensus estimates are looking for 67% EPS growth in ’21 and then a decline of 20% in 2022, while revenue growth in ’21 is expected at 3% this year and flat in ’22. Trading at 11x and 14x this and next year’s EPS estimates on a PE basis, JPM is reasonably-valued. I suspect the EPS decline in ’22 is a function of reserve releases ending and capital markets and mortgage origination tempering towards 2019 levels.

A year ago i.e.  Q4 ’20, JPM saw 47% EPS growth on 3% revenue growth as all segments were strong and JP Morgan also generated strong fee income. Return on total capital employed (a twist on ROE, or return on equity) was 14% in one one of the toughest years for banks since 2008.

Here’s the trend in EPS and revenue revisions since December ’20: (all revision data courtesy of IBES data by Refinitiv): 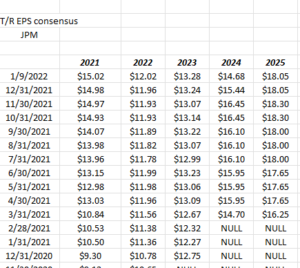 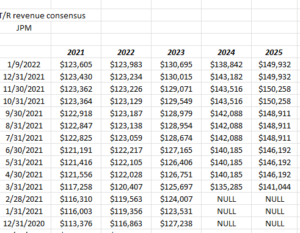 It’s a positive that the estimate revisions are higher for sure, but let’s see if the magnitude changes with the EPS and guidance on Friday morning.

Summary: If you return the stock total returns since Jan 1, 2010, JPM has led the traditional big bank crowd by about 400 bp’s over the last 12 years and for good reason. Does that leadership continue ? I think it depends on the severity of the any interest rate increases and capital market turmoil. Look for a rebound in corporate loans into 2022 as the mortgage businesses and bond markets return to equilibrium. JP Morgan has been one of this blog’s “top 10”  positions over the last decade, and it’s performed very well, while Bank of America has yet to trade above it’s $55, December, 2006 high print. There is absolutely nothing wrong with JPM as this is written, but it’s tough to own at these levels given its premium to book and tangible book values i.e. 1.9 – 2.0 and 2.5x.

Put another way, in more adverse or turbulent capital markets, I would expect JPM to trade down to a greater degree than some of the other traditional big banks, which is why – although still a bag fan of JPM and Jamie Dimon, laggards and underperformers in the financial sector are getting greater scrutiny in terms of portfolio construction.

All the value investors are starting to talk about Citigroup, most notably Bill Nygren at Oakmark Funds. Being a life-long Chicagoan, it’s very hard not to have high regard for Oakmark and Harris Associates. Their long-term track record is enviable. Clients presently have no position in Citigroup (hasn’t been owned at any point in the last 20 years) and no plans to own any in the near future, although I will be paying attention to the results come Friday morning, January 14th, 2021. 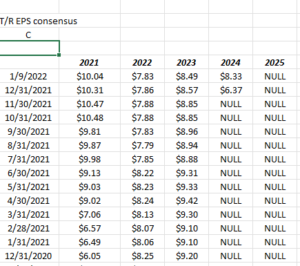 The trend in Citi’s EPS estimate for 2021 is definitely encouraging, but then look at 2022 and 2023, which are much less so. However that might have something to do with the track record of the stock too. Many times value investors in Citigroup have been “Waiting for Godot”, and wind up with a value trap. 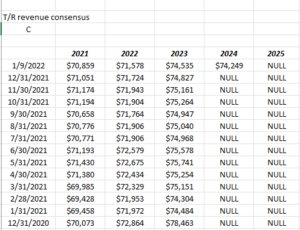 Perusing forward revenue consensus, the downward pattern to revenue estimates is not encouraging, but some of this could be due to divestitures.

The 3.10% dividend yield is encouraging and the stock certainly has been a laggard relative to much of the financial sector. I prefer to see positive revisions to EPS and revenue estimates to be comfortable holding positions over longer-term time frames.

Since 1/1/2010, an 11-year time frame where many value investors touted the stock, C has egregiously underperformed the SP 500, and not by a little. However like Apple and AMD and many other laggards of the 1990’s, new management can make a difference. Maybe Jane Fraser can be the CEO that reignites Citi.

The old maxim around technical analysis is that the more a price level is tested, the more likely it will be to eventually give way. Since early 2018, the $80 price level has been tested three times and the stock has been rejected each time.

Again, there are no positions in Citi at present and no immediate urge to buy. As the above chart details, anyone who has held C since 1/1/2010 has lost about 1,000 bp’s a year relative to the SP 500 for the last 11 years.

Of the big banks, only Wells is looking for negative EPS AND revenue growth in 2022, possibly due to the large mortgage book ? 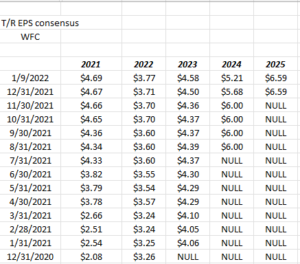 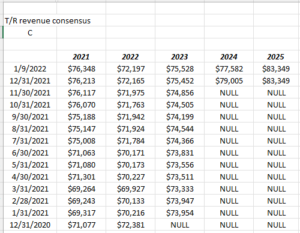 Summary / conclusion: The first week of the year was painful for growth investors, but the rotation into value has really been happening since December 1, 2021. The financial sector is considered a “value” sector although Schwab is hardly a value stock, nor really is JP Morgan. KRE (regional bank ETF) benefits greatly from a steeper yield curve. It’s tough to be any kind of a commodity investor since, while the valuation metrics usually scream “value”, the returns on capital over long periods of time are horrid and well below average.

After the 1990’s bull market, which saw a lot of bank consolidation, and higher bank valuations, 2001 and 2002 saw JP Morgan, and what used to be known as money-center banks take a beating and the banks and financials that didn’t participate in the 1990’s euphoria did better. Since 2008, banks have been drek, except for select majors like JPM, so banks like Bank of America (BAC) which is still trading at a 25% discount to its December, 2006 peak print of $55, look intriguing. Bank of America earned $4.50 per share in 2006, while the current estimates don’t expect BAC to print an EPS near $4.50 until 2024. (BAC doesn’t report Q4 ’21 earnings until January 19, 2022.)

Clients “Top 10 Holdings” could change materially over the next few months. There are a lot of similarities to late 1999, and the outperformance of SP 500 growth vs SP 500 value has been obvious the last 5 years.

Investors may not realize that zero interest rates may have been more damaging to the financial sector given that zero rates lasted from late 2008 through Q4 ’16, and then again March of ’20 through today. That’s a significant amount of time with compressed net interest margins. This graph from Bespoke’s Weekly Report this weekend got my attention: 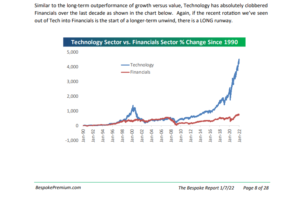 Clients have never owned Blackrock, the other big financial expected to report their Q4 ’21 earnings Friday morning, January 14th. After the false accounts scandals of Wells Fargo, I considered it a damaged brand, but the stock recovery since October ’20 has been remarkable. Citigroup is a possibility to be added to accounts, but it too has been a serial disappointer for two decades. A trade over $80 on good volume would be the first important tell that Jane Fraser is making the important changes needed.

I’m no Mike Mayo, but hopefully readers will see some benefit from a quick rundown of the financials due to report this week. The consensus estimates will change before the reports Friday morning, that is almost a certain.

Take everything you read here with great skepticism and make sure it’s a fit for your portfolio. Do your own homework. Past performance is absolutely no guarantee of future results.